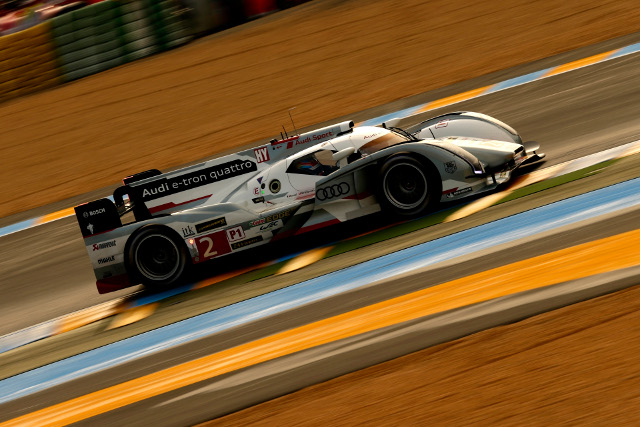 Audi reprised the test day pace in similarly changing conditions as the 2012 24 Hours of Le Mans begun with a four hour free practice session before the serious work of qualifying begins later tonight.

The three Audi R18 e-tron quattro ended the session first, second and third , the best of them with a four second advantage over the best of the two Toyota TS030 Hybrid that should supply the nearest opposition to the German manufacturer.

With a best lap of 3:25.415 Loic Duval, who was also the best man of the test day earlier this month set the fastest lap of the session in the #2 car he shares with Allan McNish and Tom Kristensen, with Benoit Treluyer (3:26.060) keeping the #1 car within a second of the benchmark pace.

Anthony Davidson, in the #8 Toyota with Stephane Sarrazin and Sebastien Buemi, set the best lap for the marque of 3:29.573 with Nick Heidfeld the best of the drivers from the three privateer LMP1 cars.

A majority of the laps were set late in the session that was interrupted by a red flag after Eric Lux crashed the #41 Greaves Motorsport after losing a wheel. Once the session was restarted the charge to the fastest times was slowed by a return to the rain that has peppered Le Mans in the build-up to the race though the track dried enough to allow improvements in the final hour of the session.

The final half hour of running was lost to another red flag after Tracy Krohn crashed his LMGTE Am Ferrari heavily at the foot of the Dunlop Curves. The American spun the car into the tyre barrier, the impact doing heavy damage to both car and barrier, the damage to which brought about a premature end to the session.

The two Porsche AG Team Manthey cars were first and third in LMGTE Pro with Richard Lietz and Patrick Pilet supplying the laps to sandwich the #71 AF Corse Ferrari that Kamui Kobayashi had put fastest before Lietz moved to the top of the class.

The best of the Aston Martin Racing fleet was fourth with the American contingent of the class some distance adrift – the best of the SRT Motorsports Vipers actually faster than the two Corvette Racing charges.

Allan Simonsen was the best of the LMGTE Am crop, though it was the pro drivers from the teams that shaped the timesheets. Marco Cioci for AF Corse was second fastest with Paolo Ruberti third in the Proton Competition Porsche.