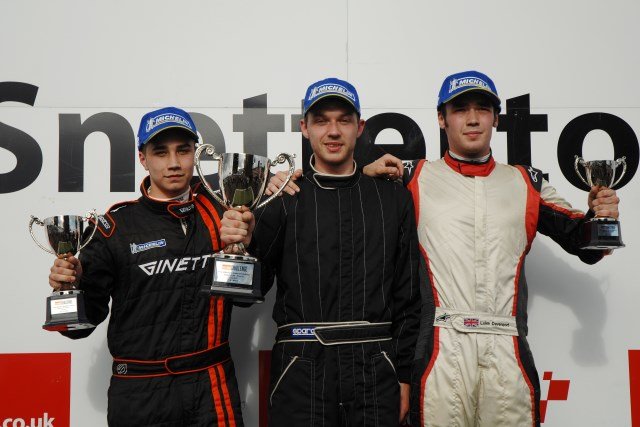 Brad Bailey took victory and extended his points lead in the third and final Protyre Ginetta GT5 Challenge race at Snetterton, but only after initial winner Will Burns was handed a 10-second penalty for an altercation with David Pittard during the race.

Burns was first to witness the chequered flag first to prevent a hat-trick for Snetterton star Pittard at the Norfolk circuit, the latter starting from pole position having won the weekend’s previous two races. The SV21 driver made a good getaway from pole to lead the field away, Burns jumping ahead of Bailey into second place exiting the tight turn two hairpin.

Luke Davenport squeezed his way up to third place also, but on lap two there was a change for the lead as Burns dived inside Pittard heading into the right hander at Oggies, Davenport trying to squeeze through at Williams but instead losing out in his optimism and dropping to sixth place.

A lap later, Pittard tried returned the favour, but contact from behind into Agostini hairpin saw Pittard’s blue G40 spinning down outside the top 10, Burns keeping the lead and continuing with minor front-end damage.

Bailey set about trying to catch the leader, but Burns held on to win the race by just under a second, leaving a close fight behind for third between Davenport and Mark Davies over the final podium position.

Davies snatched the spot on lap seven heading out of Riches into the hairpin, only for the Reflex Racing man to grab the spot back into the Agostini hairpin two bends later. The fight was not over yet, as another two corners later Davies was then caught napping by Oli Basey-Fisher who demoted the Optimum Motorsport man down to fifth.

However, it was soon all change after the race as stewards deemed that the blame for the incident involving Burns and Pittard lay with the former, Burns being handed a 10-second penalty which dropped him down to eighth, Bailey therefore taking his second victory of the season.

Second went to Davenport as the top seven all moved up a place, meaning Basey-Fisher beat Davies to the line for third place ahead of Clive Richards, who won his own entertaining tussle with Ben Hyland.

Jake Giddings had a quiet race and was promoted up to seventh ahead of the demoted Burns, Pittard recovering to ninth after the incident ahead of Callum Pointon.

The G20 class was dominated by Stuart Pearson, the Optimum Motorsport driver comfortably beating Brian Murphy to victory to continue his 100 per cent podium record in 2013, Murphy surviving an attack from the G40 of Dr Barbara Kubicka that lead to the latter spinning through the turn three grass.

The second win of the season for Bailey meant that the former Ginetta Junior racer now extends his championship lead to 39 points over Pittard, Daveport recovering from a poor Saturday qualifying to leap ahead of Burns after Snetterton.

By Simon Paice
1 Mins read
The first ever one-make Ginetta 24 hour, exclusive to Ginetta G40 cars, has been confirmed for November this year.
FeaturesGinetta GT5 Challenge