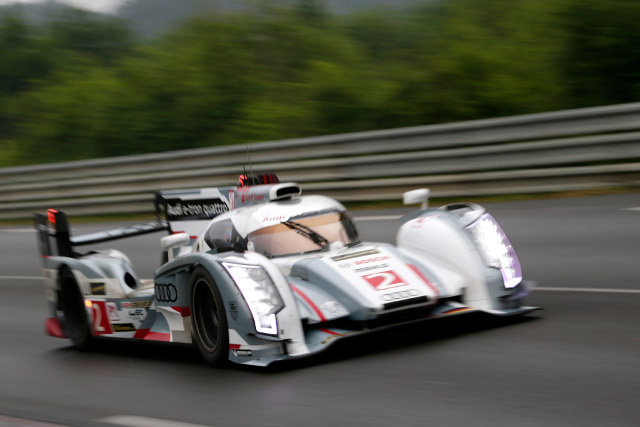 Though their three cars entered for the race ended the day first, second and third fastest Audi Motorsport were left frustrated at the end of the test day for the 24 Hours of Le Mans.

“We travelled to the test day in order to work through various programs and to learn something in the process,” explained Dr. Wolfgang Ullrich. “Unfortunately, due to the unsteady weather, we didn’t even come close to being able to try out all the planned options. It only became dry toward the end. Loïc Duval ultimately found a free lap, and he managed to set the fastest time. But only in the race we’ll really see where we stand.”

The day was dominated by wet conditions, limiting the work the 56 teams entered for the race (June 22-23) could do as much as the speed around the 8.5 mile Circuit de la Sarthe. Loic Duval, who would go on to set the best time of the day, found out the hard way, spinning the #2 R18 e-tron quattro into the barriers at Tertre Rouge. Fortunately there damage proved to be repairable, allowing the Frenchman to return to the track after the lunch break

Only in the final 90 minutes of the day’s running was it possible to take to track on slick tyres, and with the improving conditions came the best times of the day. Duval, sharing the #2 with Allan McNish and Tom Kristensen, set the best time – 3:22.583 – with the #3 and #1 entries following in the order ahead of the best of the Toyotas.