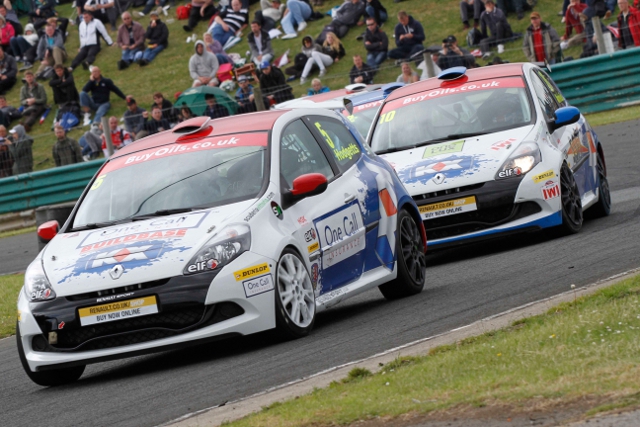 Scuderia Vittoria brought to an end the first half of the 2013 Renault UK Clio Cup season in “perfect” style with a one-two finish in the latest rounds at Croft.

The weekend’s opening had started on a sour note for the team though, with a heavy opening lap collision with the barriers for rookie Devon Modell bringing out the red flags. While Modell was fortunately able to emerged from the wreckage unharmed, his car was left with terminal damage, forcing Modell out of the rest of the weekend’s action.

The team’s highest qualifier was Stefan Hodgetts and from third on the grid, the KX Akademy member quickly stormed through to second at the first corner. A lunge at Tower Bend on the opening lap proved to be the Redditch-based racers only shot at taking the lead, with Hodgetts left to run second through to the flag.

A blistering launch in race two saw Hodgetts muscle his way into the lead, an advantage he never lost, despite several robust overtaking attempts from his rivals behind. Crossing the line for his third victory in five races, a delighted Hodgetts went on to stop his car after the flag so he could jump out and throw his gloves into the crowd trackside.

“It was fraught out there, but we’re in the UK Clio Cup and are supposed to be practicing for a career in the BTCC, so you can’t expect anything less,” said Hodgetts. “I received quite a few taps from behind so I was going to defend the lead with everything I have. I feel I really earned that one.”

Following Hodgetts home in race two to complete a stunning Scuderia Vittoria/KX Akademy one-two was Ant Whorton-Eales. From sixth on the grid, Whorton-Eales emerged from the opening lap in fourth, before benefitting from contact ahead to squeeze into second. He held the place until the end for a career-best finish and the Graduate Cup win, a great result to follow up a hard-fought sixth place in race one.

“We haven’t had much luck this year so it’s nice to finally get a podium,” said Whorton-Eales. “I hope it’ll be the first of many. It’s all down to KX Akademy and Scuderia Vittoria.”

An early casualty in race one, fellow KX Akademy star Mike Bushell showed his potential in race two. Storming through the field from eleventh on the grid, Bushell set the fastest lap of the race en-route to a fifth place finish, although he was later demoted to eighth for exceeding track limits.

Also suffering a retirement from contact in the second race was Ronnie Klos, that coming after a frustrating sixteenth place finish in the opener. Fellow One Call Insurance-backed racer Finlay Crocker battled at the edge of the top ten over the weekend, finishing eleventh and thirteenth.

“For Stefan (Hodgetts) and Ant (Whorton-Eales) to achieve a one-two finish at Croft is the perfect way to bring the first half of the season to a conclusion,” said team director Danny Buxton. “I really feel we’ve turned out fortunes around after a troubled start to the year.

“All of our drivers have performed remarkably well all weekend and I’m delighted that we continue to reward our sponsors, One Call Insurance and KX, for their ongoing support with some fantastic results.”