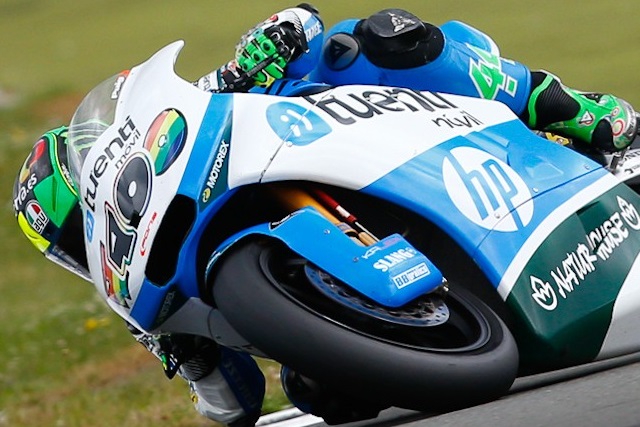 Pol Espargaro secured his second pole position in succession after dominating the Moto2 qualifying session in the Netherlands. The Spaniard hit the front inside the opening ten minutes and was never headed from there although Johann Zarco and Scott Redding did close in on him, claiming the other two places on the front row for tomorrow’s Dutch TT.

Esteve Rabat was first to set a representative time on the second Pons Kalex with a 1:39.204 but Espargaro was quick to put him in his place, breaking straight into the 1:38s to move ahead of his teammate. On consecutive laps, Pol would improve to a 1:38.734 before another blistering lap took him to a 1:38.691 but it later transpired that he had exceeded the track limits while doing so, meaning the first of those two laps would be the one to stand. It didn’t matter though as he had done more than enough for pole position anyway.

The Pons 1-2 was broken by Redding with twenty minutes remaining as the championship leader clocked a 1:38.952 and Rabat wouldn’t get much chance to respond with a crash at Stekkenwal effectively ending his afternoon. That wouldn’t allow Redding a comfort zone either though as Johann Zarco emerged in the final two minutes to snatch second, just a tenth shy of Espargaro.

Redding went marginally quicker on his final lap but couldn’t improve on third with Rabat nailed in fourth. The second row will be completed by Xavier Simeon after a last gasp flyer and former 250cc winner Anthony West who took the QMMF Speed Up to its best qualifying result of the year. Mattia Pasini built on his impressive wet weather performance to finish seventh ahead of Mika Kallio and Mike Di Meglio with Dominique Aegerter rounding out the top ten.

After his first point scoring ride in Barcelona, Danny Kent will have to come from 25th on the grid to do so again, one place behind Gino Rea, while Kyle Smith has even more work to do starting from 30th position.