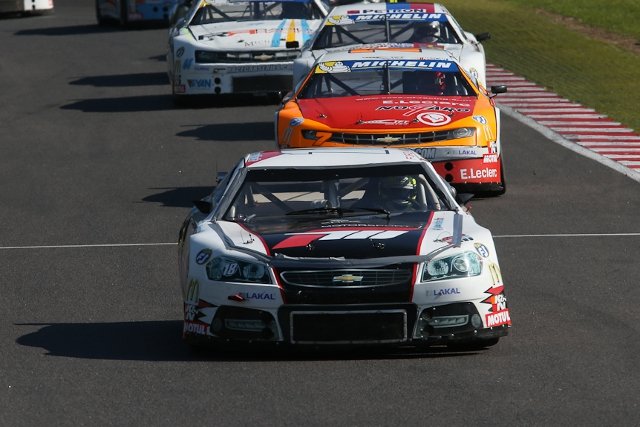 The Frenchman had been chasing down Open Division race one winner Josh Burdon, with the Australian driver looking as if he had done enough to take victory with just three laps to go. However, as the #18 car turned in to Surtees the pace dropped dramatically and Gandon was handed the lead with just two minutes left on the clock.

“I was fast behind Josh and was able to close on him each lap,” said Gandon. “It’s a shame that Josh retired as I was really looking forward to a fight for the win.”

Burdon looked as if he was going to continue round to try and save as many points as possible, but pulled off at Paddock Hill bend to confirm his first retirement of the 2013 season.

“I don’t know what the issue was,” said the championship leader, who had scored four wins and a second in the opening five races of the year. “The car just started leaking oil around my feet and I couldn’t breathe. It’s hard to swallow because we were strong all weekend and looked like we could make it 5 wins out of 6.”

Gandon led home Guillame Rousseau with Julien Goupy rounding out the podium positions, despite the #44 taking a trip through the Paddock Hill bend gravel trap on the second lap of the race.

Elsewhere, Ian Gough managed to score a fourth place finish in the #92 Gough Racing machine, the highest placed Briton in the field.

“I slowed down a little too much in the melee at the end of the race which allowed Julien to get through,” said series debutant Gough. “I started to get a lot of understeer at the end as well, so I decided to settle for fourth.”

By Justin Nguyen
4 Mins read
Could electric cars and/or SUVs be in NASCAR’s future? Alleged leaked documents pitching an EV exhibition and Dale Earnhardt Jr. revealing the idea of turning the Xfinity Series into an SUV division seem to point that way.