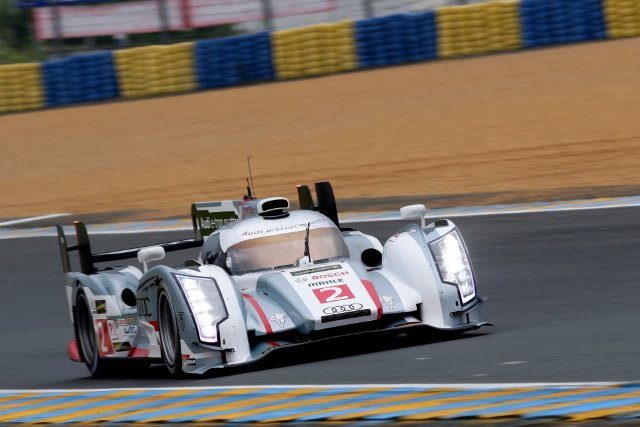 Loic Duval endured a roller coaster 24 Hours of Le Mans test day, crashing his Audi R18 e-tron quattro in the morning session before taking a repaired #2 car to the fastest time of the day late in the afternoon session.

The Frenchman, who shares the entry with Tom Kristensen and Allan McNish, found fortune late in the second session in a clear lap in the final seconds of the four hour session. With a lap of 3:22.582 he was over a second faster than the time that clinched pole of the 24 Hours of Le Mans last year and nearly three seconds faster than his nearest challenger on the day – Lucas di Grassi in the #3 Audi.

Duval’s car had been repaired over the break between the two session after he had been caught out by the slippery track at Tertre Rouge. Before then he had also set what would be the fastest lap of the difficult morning session (3:46.277) but with the drier conditions of the afternoon all teams set better laps later in the day.

At the top of the timesheets it was an Audi 1-2-3, with the #1 car of defending race winners Andre Lotterer, Benoit Treluyer and Marcel Fassler third fastest with the #8 of Anthony Davidson, Sebastien Buemi and Stephane Sarrazin the best of the Toyota TS030 Hybrid, though Sarrazin’s lap was five seconds slower than Duval’s.

Their Toyota teammates in the #7 were a further two seconds off the ultimate pace. Rebellion Racing’s #12 was the best of the three privateer LMP1 entries, 9.3 seconds slower around the Circuit de la Sarthe.

Olivier Pla was the fastest man in LMP2 for OAK Racing. His 3:38.801 was eight tenths faster than Nelson Panciatici in the better of the two Signatech Alpine cars, the #36 Pierre Ragues had gone fastest in the first session in.

Aston Martin Racing dominated both the LMGTE Pro and Am classes with V8 Vantages first and second in both categories.

Peter Dumbreck and Fred Makowiecki were responsible for the laps in the #97 and #99 respectively in LMGTE Pro. Dumbreck was another – like Duval – to be fastest in class in both of the day’s sessions. His afternoon marker (3:58.806) topped a competitive class as the top six were split by less than a second with Makowiecki, both Porsche AG Team Manthey entries, the #73 Corvette and the third Aston Martin Racing Vantage in the class all inside a second away from the Scot’s time.

More than three seconds slower than Campbell-Walter and the Aston but in third fastest Patrick Long from the Dempsey Del Piero–Proton squad was the best of a hoard of five Porsches that locked out third to seventh fastest in class with late call-up Prospeed Competition seventh in class.