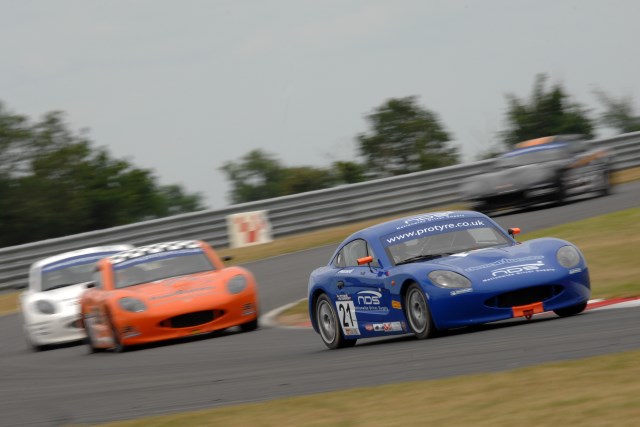 David Pittard continued his fine form at Snetterton by battling to a second win of the weekend in a hard-fought second Protyre Ginetta GT5 Challenge race.

Pittard grabbed the early lead of the race from pole-sitter Mark Davies when the Optimum Motorsport man ran wide and dropped to third place at Agostini, where he then fought out a great battle with Will Burns for the top spot over the next few laps, Burns having charged through to second place from sixth on the grid by Hamilton corner.

The race turned into a nine-car breakaway train of slipstreaming Ginetta G40 machinery, Burns challenging Pittard into Agostini on laps two and three before finally making his move stick at the Nelson’s complex on the fourth tour.

The Academy Motorsport driver’s lead only lasted a lap however, as he ran wide heading out of Williams onto the back straight, Pittard one of seven cars to move by the triple Rockingham race winner, although he quickly dispatched Ben Hyland at the back of the lead queue shortly afterwards.

SV21‘s Pittard began an attempt to make an escape at the front, but he was soon closed in on once again this time by the battling Brad Bailey and Mark Davies, Bailey having made his way by the GT Supercup racer on lap six for second spot.

A lap later the order changed once more, Thiago Calvet dropping out of the lead train before Clive Richards slipped from fourth place down to seventh after a fight with Luke Davenport, the latter recovering through the field with Oli Basey-Fisher once again having started 11th and 10th respectively.

By lap nine the top five were all glued together once again, and as they went onto the last lap of the race they were joined by the recovering Burns, setting up a six-car final lap showdown.

Burns overtook both two cars in one fell swoop into the Agostini hairpin to move up to fourth place, Basey-Fisher and Davenport the victims as they squabbled over fifth for the remainder of the lap. Up front meanwhile, Pittard hung on to make it two from two at Snetterton ahead of Bailey, Davies and Burns, Basey-Fisher beating Davenport to the line for fifth.

“That’s probably the hardest race I’ve ever had”, said a delighted Pittard afterwards. “That’s the beauty of the championship is that you can never really get away”.

Hyland finished a further six seconds back in seventh place, Richards, Gary Duckman and Calvet rounding out the top 10.

The G20 class was equally tense as Stuart Pearson and Gary Simms staged their own crowd-pleasing battle for honours. Pearson held the early advantage until Simms moved ahead, only to have to re-pass Pearson on lap six heading into Riches in what would prove the class-winning overtake despite Pearson being glued to the Reflex Racing driver’s rear all the way to the flag.

By Simon Paice
1 Mins read
The first ever one-make Ginetta 24 hour, exclusive to Ginetta G40 cars, has been confirmed for November this year.
FeaturesGinetta GT5 Challenge