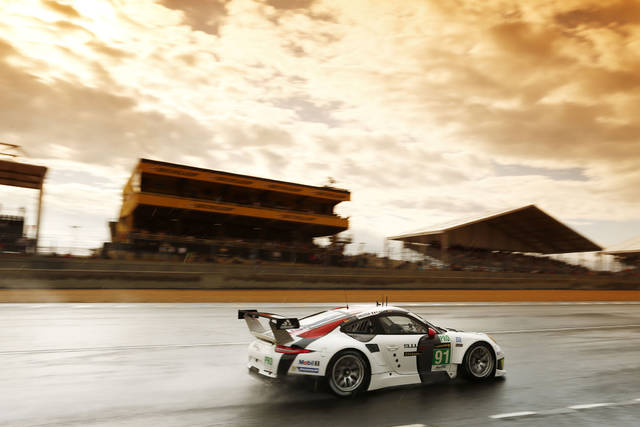 The Porsche drivers at Le Mans were left disappointed in the second qualifying session for the 2013 24 Hours of Le Mans as the heavens opened and ended any hopes of improving lap times.

With limited running because of the weather conditions the teams did benefit from the wet weather as they prepare for the race which looks set have rain at some point during the 24 hours.

“These were very difficult conditions” admitted Timo Bernhard, “I drove an installation lap to check everything, because the engine and gearbox are new for the race. Afterwards I stayed out for another two laps under mixed conditions.

“The performance was okay, but the times don’t mean very much. So we stopped because it started raining again. Still, it’s important to drive the car under such conditions, after all it might be like this in the race.”

“On the first kilometres we had a lot of water on the track making the risk of aquaplaning very high. After the second chicane it was totally dry which wrecked our wet tyres.” he added.

Patrick Long was frustrated by the session “I drove one single lap. It was too wet for slicks and too dry for wet tyres. But that’s Le Mans. The conditions are the same for us all.”

Meanwhile actor Patrick Dempsey‘s preperation was also hampered by the weather. “I drove an installation lap. There is still a lot to do to get our car optimally prepared for the race.”