Round 6 saw the championship return to its spiritual home and be part of the Monster Mayhem Festival, now in its second year.

The rallycross entry was without a doubt the largest this year with over seventy entries. Fourteen of which were in the supercar class. Close racing was inevitable which resulted in more than a few coming togethers during the heats. Most noticably at the start of the second heat involving Pat Doran, Jon B. Hrolfsson and Dutchman Wil Teurlings ending both of the latters racing.

Current Junior Swift Champion James J.J Ross experienced his first supercar outing just days after his sixteenth birthday and was unfortunate to experience mechanical problems, hopefully he will be back for more.

Andy Grant joined the back row of the A Final as the winner of the B Final. All eyes were on the front row which consisted of Liam Doran on pole with championship leader Julian Godfrey in second and Belgian Koen Pauwels making up the front row. The second row saw Jos Jansen, fresh from his Euro Challenge win at Duivelsberg, and Pat Doran. Anybody on the front two rows were capable of winning the final and the anticipation was not to disappoint. Especially when Liam made a Jump Start just heightening the tension.

Right from the green lights saw Liam head into Chessons just ahead of Pauwels. Godfrey opted to take his joker along with Jansen and Andy Grant. During all the action at the start and on the first loose section Steve Mundy drifted wide and hit the armco barriers that seperated the exit form the joker lap. The head of the pack saw Liam Doran, Pauwels and Pat Doran in that order.

Pauwels took his joker on the third lap and came out just behind Pat Doran while Liam made the most of clear air and built on his lead.

The final lap saw Liam and Pat take their jokers. Which could not have played out better for Liam bringing him out still in the lead with a clear run to claim the win. Pat came out in traffic and in forth place.

In other classes saw wins for championship leaders Kevin Hansen in the Suzuki Swift Junior’s. Tony Lynch in the BMW Mini’s. Extend their leading positions.

Mark Scott in the RX150’s continued his seasons seemingly untouchable form despite being kept honest by Leo Forster and Dave Bellerby. Shane Lynch also proved that he can do more than drift making his RX150 debut as a guess driver.

The fiercely contested Hot Hatch class saw John Lyne clinch victory and step up into the top spot for the championship 3 points ahead of Craig Lomax. With the Polish drivers Slawomir Woloch and Tomasz Wielgosz still in contension. The closing rounds will guarantee some very close tracing. 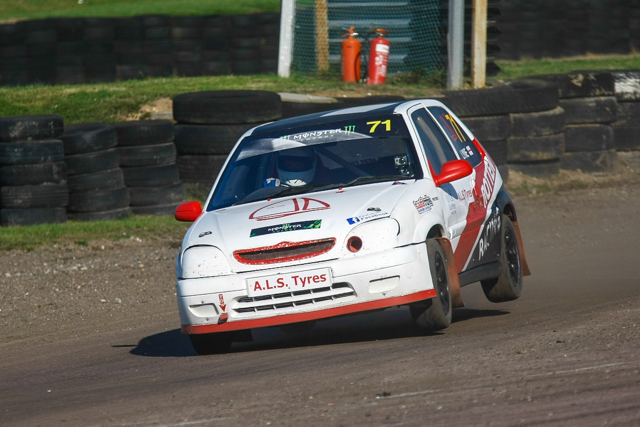 Without a doubt the most celebrated class win of the weekend was that of Stuart Emery in the Super Nationals displaying some truly inspiring and at times gutsy driving brought him his first class win at his home circuit keeping his Championship hopes very much alive only nineteen points behind current leader Ash Simpson.

The Suzuki Swift battle saw Leader Graham Rodemark take the honours but only after exhaustive pressure from from rival Tristan Ovenden which resulted in him skilfully avoiding rolling on the last corner at Paddock bend but ultimately saw his race ended. Kris Fruru claimed his best result in a Suzuki picking up second place and third spot in the championship.

One of the most talked about classes of the weekend was that of the Retro Rallycross seeing iconic cars from the world of Rallycross past in full action on the track. Everything from Rob Gibsons Metro 6R4, Grzegorz Kalinecki’s Lancia Delta, Barry Stewarts Porsche 911 and for the first time the much anticipated and beautiful Ford Escort MK2 of Tommy Graham. 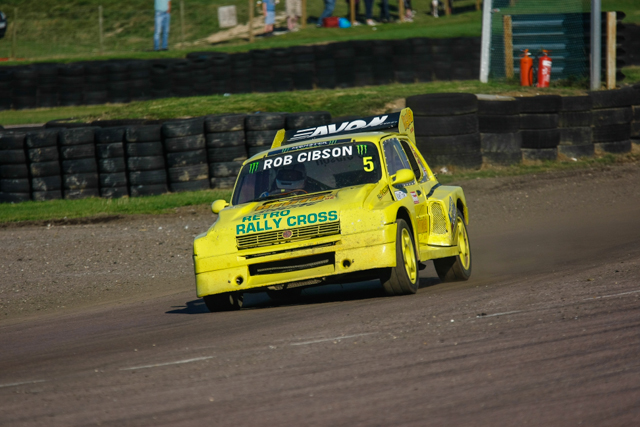 These guys really didn’t hold anything back, this unfortunately resulted in Tommy Graham rolling his Escort in a spectacular fashion. Thankfully Tommy walked away fro it however the car is going to need a bit of TLC!

There was a winner takes all drift competition which saw many of the top names from the British Drift scene which saw Shane Lynch and local favorite Micheal Marshall battle it out for the top honours and much to the delight of the crowd saw come away with the win.

By Jack Cunnane
2 Mins read
Johan Kristoffersson has finally broken his Sunday curse and taken a win on a Sunday after a controversial eighth round of the FIA World Rallycross Championship in Barcelona.
FIA World RallycrossOff RoadRallycross

Timmy Hansen Takes Stunning Win on Day One in Barcelona

By Jack Cunnane
2 Mins read
A great tyre strategy combined with an amazing drive from Timmy Hansen saw him secure his first win of the year in round seven of the FIA World Rallycross Championship in Barcelona.