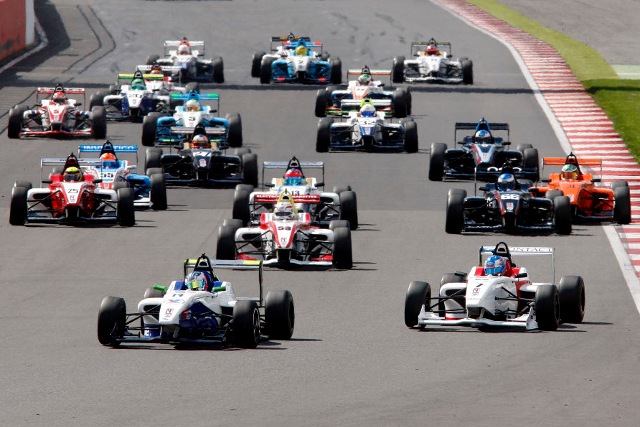 The 2013 BRDC Formula 4 Championship returns to the scene of its inaugural rounds this weekend when it makes its second appearance of the season at the home of British motorsport, Silverstone.

On the championship’s first visit to Northamptonshire in April, the series burst into life with three exceptional races, setting the tone for what’s been an ultra-competitive, action-packed season so far.

Just 33 points separate the top four in the points, with Lanan Racing’s Hughes leading the way after  a superb weekend last time out at Brands Hatch. A win and two fourth places in Kent blasted him to the front, added to four more podium finishes, including one win, in the first twelve races.

While the championship may have produced eleven different race-winners so far this season, remarkably Morris hasn’t been one of them. This hasn’t hampered the former Ginetta Junior champion’s title challenge though, the Hillspeed ace sitting 16 points shy of Hughes thanks to eleven top four finishes in fifteen races.

Erstwhile points leader Dalton currently sits third in the points. Whilst the MGR Motorsport racer has been unable to maintain his early season charge, which produced two wins in the first four races, regular top six finishes have kept him well and truly in the hunt.

Barlow meanwhile has been a revelation in his debut car-racing season, with two wins being the highlights of his run to fourth in the points, the Sean Walkinshaw Racing ace having risen up the standings in recent times with seven consecutive top seven finishes.

All four drivers have fond memories of the trip to Silverstone in April, Hughes having taken pole position, Barlow and Dalton a race win apiece, and Morris a podium treble that gave him the early championship lead, meaning all four should be at the front once again this weekend.

The other race-winner that weekend was Matt Bell, the privateer turned Douglas Motorsport racer being the only one in the championship with three to his name so far. Unfortunately for Bell though, a hat-trick of DNF’s have derailed his championship charge, putting him 64 points adrift in sixth.

Closely sandwiching him in the points are Charlie Robertson and Matthew Graham, both racers having picked up one race win so far in their maiden single-seater campaigns. Both, like Bell, will still feel they can win the title, so will be looking to return to the top step of the podium this weekend and bridge the gap to the top four.

The other drivers to have tasted the winners champagne so far this season are James Fletcher, Struan Moore, Ross Gunn and Pietro Fittipaldi, and the quartet will all be hoping to win again at Silverstone.

Joining Morris in looking for their maiden successes meanwhile will be Raoul Hyman, the HHC Motorsport ace having taken four rostrum finishes to date, Diego Menchaca, the Mexican making his first podium visit last time out, and Falco Wauer, the American with two podiums so far.

With well over a dozen drivers in the fight for race victories, and with the championship battle beginning to take shape, the BRDC Formula 4 Championship races this weekend are not to be missed.