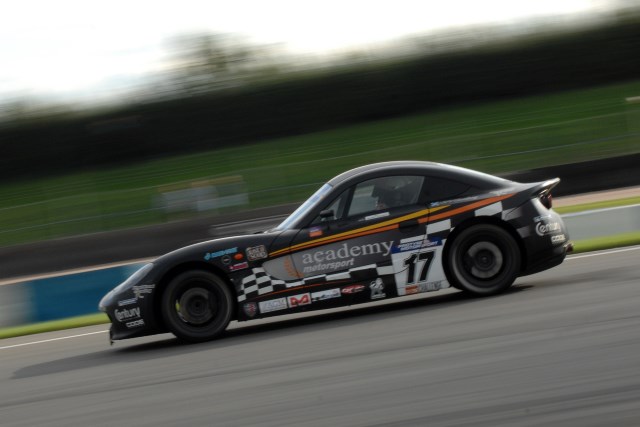 A nerve-jangling climax to the 2013 Protyre Ginetta GT5 Challenge at Donington Park fell the way of Oli Basey-Fisher, who survived the tension to beat his team-mate Will Burns to the title.

Set up by a phenomenal weekend at Brands Hatch that attached the 18-year-old to the back of a three-way fight for the championship with Brad Bailey and Academy Motorsport team-mate Burns, Basey-Fisher survived a chaotic finale at Donington Park to outscore his rivals and snatch the championship in a final race decider.

“It feels pretty damn incredible”, Basey-Fisher told thecheckeredflag.co.uk afterwards. “It’s been too tense! In fact the whole of this weekend has been pretty tense to be honest.

“Coming into the weekend I knew I had a slight chance of winning the championship, but it’s something which you never think is really going to happen. You try not to let yourself think that it’s going to happen because it gets into your head a little bit.”

The weekend started brightly for the former Ginetta Scholarship winner as he stole an important pole-position on Saturday afternoon, fighting his way to third place in race one the following morning before the second encounter was cancelled after a substantial accident for Tudor Alexander‘s G20 machine at Coppice.

“We knew we would be quick from Thursday, but even then in the races and qualifying especially showed that, I put it on pole for the first race and then my roll bar snapped so I couldn’t put in another lap, so you can’t predict these things.

“So to actually come from that and go on to claim this championship is something pretty special.”

Basey-Fisher was equipped with the speed to take the title, and entered the final race with a four-point lead cushion over team-mate Burns to leave the duo in a straight fight for the title after a disastrous weekend for Bailey. The final contest was littered with mayhem, oil on the circuit sending Ginetta G40s – including Basey-Fisher – scattering at Old Hairpin before the red flags were waved, the stage set once again for the crescendo.

On the restart, Basey-Fisher kept his Academy team-mate behind him, passing Tor McIlroy and Jake Giddings to move up to third. Burns only needed to grab fourth from Giddings in their three-way scrap for the crown himself, but spun his hopes away exiting the final corner to seal Basey-Fisher’s fate, the action leaving the champion himself guessing until the flag.

“The racing was almost too close for my liking really”, he added. “The second part of the race once all the carnage had finished, I knew that as long as me and Will stayed in fourth and fifth then I was going to win, but unfortunately Giddy started slowing down which meant I had to pass him and hope that Will didn’t follow me through.

“It then became a three-way fight between us, and who knows how I managed to stay in front because it was a tense old race!”

Options for next year remain on the table for Basey-Fisher who plans to continue in Ginettas, weighing up a return to the British GT paddock for 2014 and possibily a graduation to the main stage itself.

“Perhaps GT Supercup, or maybe even GT4 in the British GT paddock. I don’t know, but we’ll see.”

By Charlotte Hardy
1 Mins read
Lewis Ryder is confirmed to make his Ginetta GT5 Challenge debut in the coming 2019 season as a privateer entrant.