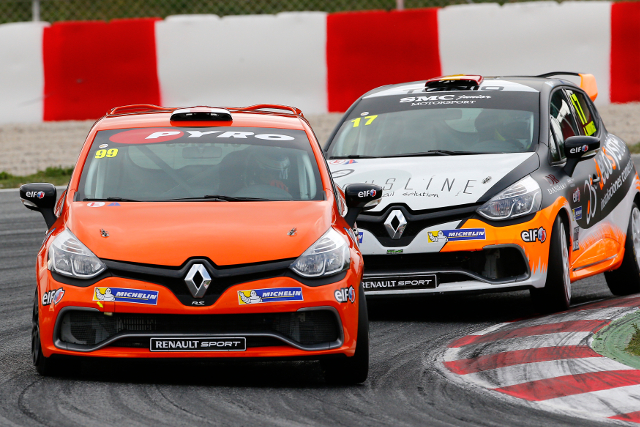 Newly-crowned Renault UK Clio Cup champion Josh Files is in prime position to make it a double title-winning campaign after a stunning double victory on the penultimate weekend of the 2013 Eurocup Clio season.

One week after wrapping up the UK title in the final rounds at Brands Hatch GP, Files was the class of the field at Catalunya, taking a brace of dominant race wins to overhaul Massimiliano Pedala’s 23 point championship lead.

With confidence high after the UK success, Files was straight on the pace in Barcelona, putting his Team Pyro-prepared fourth-generation Clio on pole position for both encounters, his first poles of the season.

Leading away from pole position, Files briefly relinquished the lead to Antonio Martinez on lap four, but fought back past the local racer soon after to achieve the race win, his first since the season-opening round at Imola.

Files went on to lead Round 10 from start to finish, maintaining a healthy gap to the chasing pack throughout to card his third Eurocup victory. With Pedala finishing fifth and ninth in the two races, Files now holds an eleven point lead in the points with only two races remaining at Motorland Aragon on November 2/3.

“It has been a perfect weekend and I think winning the UK Clio Cup title perhaps helped me relax a little,” said Files. “I’d love to win both championships and that’s why I had to get victories at Catalunya.

“Starting the races from pole massively simplifies things in the races. Antonio Martinez was quite forceful in the first race and it was initially hard to defend against him. It was great to beat him, as it would be a massive understatement to say that he knows Catalunya inside out – he literally lives around the corner! With all that in mind, I knew it would be crucial to make a break on the opening lap in race two, so that’s what I did. From there, all I had to do was control the gap.

“The results put us in a great position for the finale at Motorland Aragon – all we need now is a race win and we’ll be untouchable.”