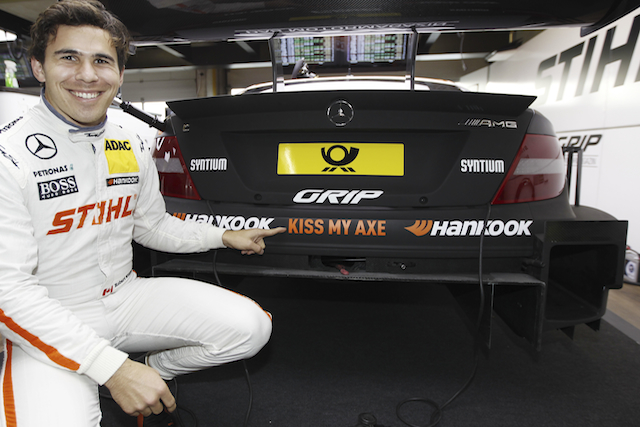 In only his second season in the DTM, Canada’s Robert Wickens has shown that he can mix it with the best in the series, having been in the fight for the title until Oschersleben. The 2011 World Series by Renault champion was called to represent Mercedes-Benz in the DTM, and has been improving constantly every time he hits the track. However, the 24-year-old knows that there is still progress to be made, no matter your level.

Speaking with theCheckeredFlag.co.uk, he said that “it is has been a dream of mine” to have the honour of driving for the Stuttgart outfit, as well as being proud to be representing Canada: “One of the reasons I joined the DTM was to be able work with Mercedes. I’m having a phenomenal time here and I’m just really happy. In terms of representing Canada it would be fantastic if DTM was more popular over there. Unfortunately, it is not even on TV. But I love the fact that I’m Canadian and I wouldn’t change it if I could.”

Even though his performance has been vastly superior to what happened last year, he admitted that he has become stronger as a driver, but was overall rather happy with this season: “There is obviously more than one reason why I have been more competitive this year than last season. But there are still some areas I need to improve on. I need to work on my consistency. But of course I’m happy that I got my first win and my first pole position. It was a good year.”

One of the talking points that have been mentioned with regards to the shortened weekend is how the 90-minute free practice session can really make or break a driver’s weekend. Robert said that it has been difficult for everyone, but there is always a structure that is stuck to during the weekend: “It’s the same for every driver out there and it’s the same for every team out there. For sure, some people may have handled it better. Maybe we handled it better on some races over others, but at the end of the day you have your test plan that you work through and that’s the bottom line.”

As with every driver, Wickens has had his fair share of ups and downs this year, such as having the win from Norisring taken away from him, disappointment in Moscow, as well as retiring after being collected by Bruno Spengler in Oschersleben, but there are some moments that can’t be taken away from the former Red Bull Junior driver: “The high was definitely winning the Nurburgring. Coming off of Norisring where I had the win taken away from me, I really wanted to prove that I can rebound from that and win again, but unfortunately the following weekend wasn’t successful.” 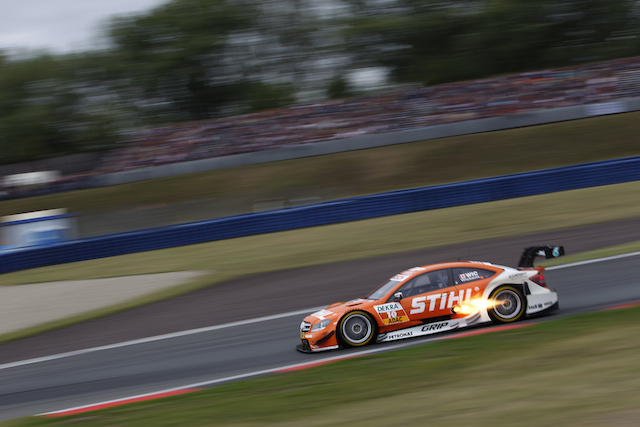 Oschersleben was a race for Wickens to forget (Credit: Daimler Global Media)

He was part of the historic moment at Brands Hatch earlier this year, when he was part of a historic moment when both himself and Spengler were on the podium behind race winner Mike Rockenfeller, after Gary Paffett was demoted three places after the flag due to an yellow flag infraction.  We asked whether his countryman gave him any advice about the DTM before he joined up, but nothing of the sort transpired: “Everyone is always surprised by it, but it’s not that we have a bad relationship with each other. It’s just because he is five years ahead in his career than I am. I had never raced him in my life before we were in the DTM together. The first time I even spoke to him was when we were both in the DTM together. I think we both have respect for each other since we’re racing in one of motorsport’s highest levels, but in terms of any advice, he didn’t give me anything, because we just didn’t really know each other.”

Even with the reduction in ranks for 2013, as well as the youthful “shot in the arm,” thanks to Daniel Juncadella and Pascal Wehrlein on board, Wickens said that he honestly “didn’t really know what to expect.” Being as it is only his second year in the series, he says, “I’m still pretty new to the DTM,” and described his relationship with former–F1 and DTM driver David Coulthard in 2012 as great fun. The team atmosphere is something that drivers need to feel comfortable and relaxed in, as he goes on to explain: “The team atmosphere at Mercedes is really good. There is not one driver on the team I don’t enjoy having lunch with. If you see someone sitting down, all of us can sit together and eat. There has never been any tension between us and I think this has helped a lot this year.”

For Wickens, it was a disappointing final qualifying session, where he placed as the highest of the Mercedes drivers in thirteenth place. However, he hopes for at least some points for the 44-lap race: “The qualifying is in the books. Of course I want to score as many points as possible. A top five finish would be great, but a podium would be phenomenal.”

With the third place in the drivers’ championship yet to be decided, Robert, along with Christian Vietoris and Mattias Ekstrom, will be fighting for the final spot in the top three drivers of 2013, but with the rain now hitting the track hard before the race, anything could happen. We wish Robert all the best for this race and thank him for taking the time out of his busy schedule to talk to TCF.