Johnson takes a 28 point lead over Matt Kenseth in to the final race, meaning he only needs to finish in 23th or better to guarantee the 2013 NASCAR Sprint Cup. As simple as that sounds, Johnson’s recent track record at Homestead does not bode too well for the #48.

Johnson is in a strong position at the top of the standings (Credit: Harry How/Getty Images)

In the past two years, Johnson has only managed a best finish of 32nd at the Miami circuit, and earlier in this season, the five-time champion had a four-race run of finishing no higher than 28th, a run that ended just as the Chase races began.

A terrible race for Kenseth at Phoenix means the ball is firmly in Johnson’s court, with Kenseth knowing he will have to take the maximum 48 points – 46 for winning, plus bonus points for leading a lap and leading the most laps – from Homestead and hope that Johnson suffers more end of year bad luck. In the event of a tie, the title would go to Kenseth, who has one win over Johnson after 35 of 36 races.

Kenseth has one win at Homestead, coming in 2007, but that was one of only five top-ten finishes at the 1.5-mile track in his Sprint Cup career. Last year Kenseth could only manage 18th at the season finale. When it comes to average finishes at Miami, Johnson has the edge on the #20, clocking in at an average finish at 15.33, while Kenseth sits on 17.62.

While the main focus will be on the top two, Kevin Harvick could still mathematically take the title in his final year with Richard Childress Racing.

The #29 has by far the best record out of the three contenders, scoring an average finish of 7.92, only finishing outside of the top ten in 2002 and 2007. Harvick will need a top ten finish to even pull level with Johnson, which his record suggests is more than likely to happen. To have a realistic shot at the title, though, Harvick will need to secure all 48 points and hope Johnson fails to break in to the top 30.

In the battle for 14th – the first of the non-Chasers – a two-horse race sees outgoing Sprint Cup Champion Brad Keselowski take a lead of just 9 points over Jamie McMurray in to the final race of the year. Neither driver has really set the track alight in Miami, Keselowski having never broken in to the top 10, while McMurray has 3 to his name. However, since moving to Earnhardt Ganassi Racing in 2010, McMurray has only managed a best finish of 14th.

The duo seem finely balanced on current form, though, with both drivers having a win in the last five races, meaning the race for 14th looks like it could just as, if not more, exciting than the battle for the overall title.

Finally, Ricky Stenhouse, Jr. sits comfortably at the top of the Rookie of the Year standings, a clear 265 points ahead of his closest rival, Danica Patrick. 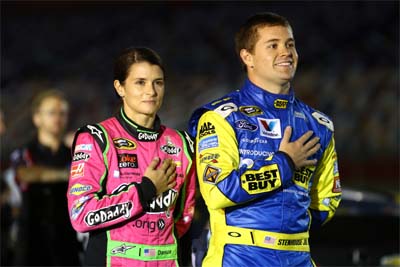 By Justin Nguyen
2 Mins read
Rick Ware Racing has added Josh Bilicki for a full-time Cup campaign in the #52, while 1990 Daytona 500 winner Derrike Cope returns to the race in the team’s #15.