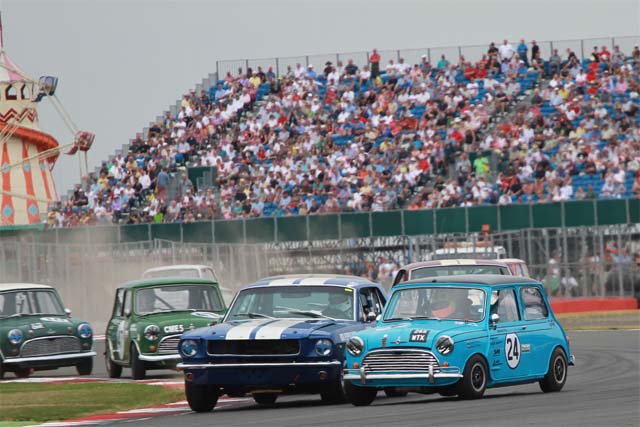 Christmas 2013 is now sure to be a ‘Classic’ Christmas after confirmation that ITV4 will be screening highlights of the 2013 Silverstone Classic on Christmas morning.

The dedicated one hour programme will air at 9:05am, offering the rare opportunity to gift tickets for the 2014 event while watching highlights of this year’s record breaking weekend.

“It will really bring Christmas presents to life,” said Event Director, Nick Wigley. “Can you imagine the added thrill of waking up on Christmas morning, receiving Silverstone Classic tickets and then fully appreciating what a special treat is in store by switching on the television. The prospect is almost too good to be true!”

The decision to repeat the Silverstone Classic highlights comes after the original four broadcasts boasted strong viewing figures immediately after the summer’s event. Over one million viewers have taken in the sights and sounds of the 2013 event, featuring the intense on-track action, stunning classic car displays and interviews with motor racing royalty such as Sir Jackie Stewart, Derek Bell MBE and Murray Walker OBE.

Tickets can still be booked over the Christmas period through the on-line box office at www.silverstoneclassic.com, which can even be purchased on Christmas Day for those tempted by what they have seen on their televisions.

A Three-Way Sprint to Gold Entering Nitro Rallycross' Final Round

By Kieran Forrest
2 Mins read
As the season comes to a close, the driver’s title is still anyone’s game as three drivers head up the field for a run at gold in Nitro Rallycross’ inaugural season.
Formula 1Other

By Adela
4 Mins read
Have a read on some insights of #ArcticXPrix to prepare yourself for the first motorsport event in the area.