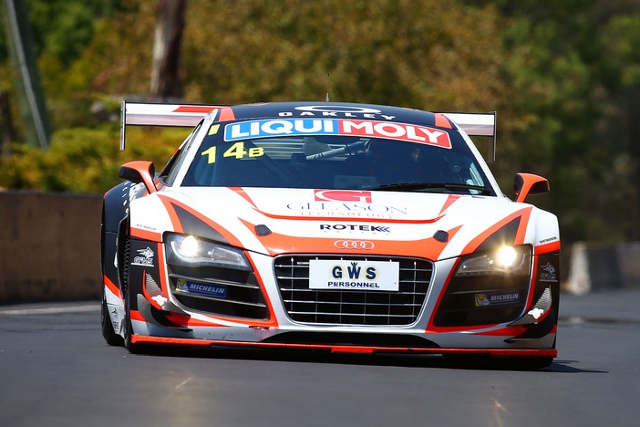 A misfire spelled the end to Rotek Racing’s Liqui–Moly Bathurst 12 Hours, bringing to a close a performance that had seen them lead their class – and the race – in the opening hours.

Having qualified the car on pole in Class B – the category for older spec GT3 machinery – Oliver Gavin was strapped into the Audi R8 LMS for the opening stint. The Corvette Racing works driver kept the class lead, moving up from the 13th place starting position he earned on Saturday, taking advantage of incidents ahead as well as fighting past several Class A cars.

Gavin took the overall lead twice in the opening hours before handing the car over to Richard Meins, helping to cement a lap lead over their nearest challenger in class.

However, it was during Meins’ stint that the misfire began, the car losing pace accordingly.

The team tried to remedy the problem, resetting the systems on the car as unscheduled stops to search for a diagnosis delayed them. Shortly after Rob Huff climbed aboard the car – before Kevin Gleason got to drive a race stint – the team finally gave in, retiring the car from race.

It was later found that a damaged valve spring had been the cause of the problem.

“To end the Liqui-Moly Bathurst 12 Hours in this manor is clearly disappointing but, on the flipside, Rotek Racing has shown so much promise and potential this weekend,” said team principal Robb Holland. “This is only the team’s first attempt at Bathurst and to have superstar drivers, including Rob and Oliver, along for the ride demonstrates that Rotek is already making a mark in the highest echelons of international motorsport.”

“I’m proud of what the team and our drivers have achieved in Australia, taking pole position in class and leading the race. I think we can carry this undeniable speed to Europe in the VLN Endurance Championship at the Nurburgring and the BTCC.”

Holland himself will take driving duties for the team’s BTCC entry, entering and Audi A3 in the championship.

By Josh Disborough
2 Mins read
Sim Hardware manufacturer, Fanatec, has entered into an expanded partnership with the SRO Motorsports Group which will see it become a title sponsor as well as support a new initiative in the Endurance Cup.
Endurance RacingFeaturesFIA WECSportscars