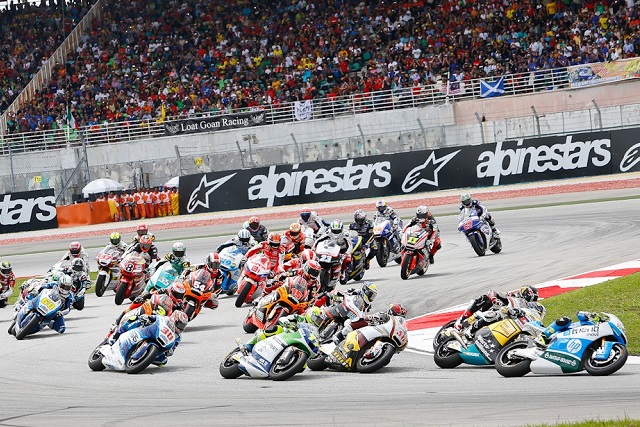 Although it’s the intermediate class as far as Grand Prix racing is concerned, Moto2 continues to provide gripping races and championship battles the envy of almost any motorsport series in the world. 2013 was no different as Britain’s great young hope went into battle against the latest superstar from the Spanish production line.

Scott Redding still had something to prove despite an impressive Grand Prix career with the Marc VDS rider yet to demonstrate he could construct a championship challenge. On the other hand, Pol Espargaro had the hopes of a nation on his shoulders having pushed Marc Marquez all the way in 2012 and was now seen as the heir apparent to the Moto2 throne.

What followed was a rivalry that became one of the stories of the year in any class as Pol and Scott pushed each other to the limit. From Espargaro’s last lap victories in Qatar and Assen to Redding’s triumphant homecoming at Silverstone, the duel provided on-track fireworks and psychological warfare but in the end, a heartbreaking injury in Australia put paid to Scott’s hopes, effectively handing the title to Espargaro.

Both have moved onto bigger and better things but don’t think for one moment that Moto2 is a weaker championship for it. One of the beauties of the intermediate class is that it’s the last stop on the road to MotoGP. Riders who have failed to make the grade in the big league are searching for a route back in. The top teenage talent from Moto3 are keen to test their skills at the next level. Year after year, Moto2 boats a star-studded line-up and this year is arguably the best yet. Among the cast of 2013 we see four former world champions, the reigning AMA Superbike Champion, the reigning Moto3 champion and perhaps most exciting of all, the current World Supersport Champion, Sam Lowes.

Sam would probably be among those to point out that Moto2 wasn’t the only series featuring a thrilling head-to-head for the title. The Briton fought tooth and nail with Turkey’s Kenan Sofuoglu for the Supersport crown, the two even coming together as they disputed victory at Silverstone, but Lowes would eventually prevail with a race to spare. The task now for Sam is to succeed where Sofuoglu failed and carry his success into Moto2. Speed Up clearly believe Lowes is up to the job and have returned with their own team after a year away, signing Sam as the spearhead for their campaign.

The Pons team have been forced to recruit after losing Espargaro to MotoGP and Esteve Rabat to Marc VDS but their choice of replacements looks to be inspired. Luis Salom led the Moto3 title race for much of last year and will now test himself in the intermediate class while the man that pipped him to the Moto3 title last November, Maverick Vinales, will partner him at the 2013 champion team.

Marc VDS say goodbye to Scott Redding but as mentioned, they have replaced him with the best placed rider from last year to remain in the championship, Esteve Rabat. Understandably, the likeable Spaniard starts the year as favourite but Mika Kallio may have something to say about that having stayed on for a fourth season with the Belgian outfit. Both have looked impressive in testing and the main competition appears likely to come from Thomas Luthi with the Swiss rider desperate to make the step from race winner to championship challenger. After avoiding the injury problems that handicapped him early in 2013, this could be his year.

Two other riders in the field tasted victory last year and both will ride out of the Mapfre Aspar garage. Former 125cc champion Nicolas Terol remains a frustrating figure in the intermediate class, blindingly fast on some days but anonymous on others while his teammate Jordi Torres has quickly established himself as one of the most popular riders in the paddock, not least because of his ‘knee-down’ celebration.

The winning feeling continued to elude Dominique Aegerter last season but the Swiss rider is as consistent as they come. Aegerter scored points at every single round on his way to fifth in the championship but in 2014, surely he would swap another seventeen points scoring rides for one winning performance. Takaaki Nakagami is another that came tantalisingly close to the breakthrough win in 2013, finishing second in four consecutive races during the summer and although he has departed Italtrans for Tadayuki Okada’s Idemitsu Honda Team Asia, Nakagami has retained Kalex machinery and is certain to figure at the front of Grands Prix again.

Forward Racing return but on a unique chassis based on last season’s title winning Kalex, badged a ‘Forward KLX’ with Simone Corsi and Mattia Pasini retained but the team with the most intrigue surrounding them is AirAsia Caterham Moto Racing. Tony Fernandes’ outfit have signed Johann Zarco and AMA Superbike champion Josh Herrin and will use their Formula One windtunnel to help develop their Suter chassis. One rider who we sadly won’t see in Qatar is Tech 3’s Alex Marinelarena who suffered a heavy crash in testing at Paul Ricard, leaving him in a coma for the best part of a week. The Spaniard will be replaced by compatriot Ricard Cardus.

In truth, big things are expected of the Moto2 class in general this season with such a heavyweight line-up of riders. The golden ticket to MotoGP could be just one year away for the riders in this field and with so much on the line, fierce racing is guaranteed. The man that emerges from it all as champion is anyone’s guess.