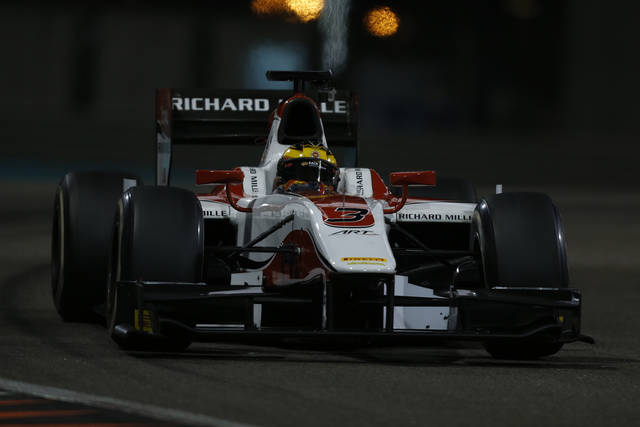 Belgian driver Stoffel Vandoorne will race in the GP2 series in 2014 for ART Grand Prix, and will have a Japanese team-mate in the form of Takuya Izawa.

The McLaren F1 reserve driver will also face competition from Raffaele Marciello this season, with the Ferrari young driver announced to compete in the series by his Italian bosses.

“I’m very excited to have been selected to race for the ART GP2 team for 2014,” said Vandoorne on the official GP2 Series website.

“Having won the Eurocup Formula Renault 2.0 in 2012, and having finished second in the World Series by Renault 3.5 in 2013, I feel I’m making good progress towards my ultimate goal: Formula 1.”

“GP2 is the prime feeder series for Formula 1, and GP2 cars are powerful and fast. ART has an excellent track record in GP2, and I’m very grateful to Nicolas Todt and Frederic Vasseur, the team’s owners, for giving me this opportunity”

In fact, Vandoorne’s career to date makes for excellent reading.  He only started racing single-seater cars in 2010, racing in the F4 Eurocup 1.6 series, and clinching the championship with two races to spare.  In 2012, he won the Eurocup Formula Renault 2.0 series, before finishing second last year in his rookie season in the Formula Renault 3.5 series, winning four races along the way.

Raffaele Marciello’s career is equally impressive, and with the backing of the Ferrari Driving Academy, his career has reached the GP2 series at the tender age of 19.

“Raffaele had a great 2013, winning a very important and competitive series,” said Luca Baldisserri, the head of the Ferrari Driving Academy to Autosport.

“I’m really happy to be a part of Racing Engineering,” said Marciello to Autosport.  “It is one of the strongest teams and I feel best placed and very proud to be with them.

“GP2 is a fantastic platform because you can start learning more about tyre management and because you are also in the paddock close to the Formula 1 environment.

“I am really thankful for the continued support of Ferrari Driver Academy and for the opportunity to race with my new team, I’m sure that we’ll do a really good job together.”

Whilst Vandoorne and Marciello have yet to race against each other in their relative short careers, the prospect of two of the brightest young talents going head-to-head in 2014 has potential to be mouth-watering.  Add in the fact that one is employed by McLaren and the other by Ferrari – long time rivals on track in Formula 1 – adds another dimension.