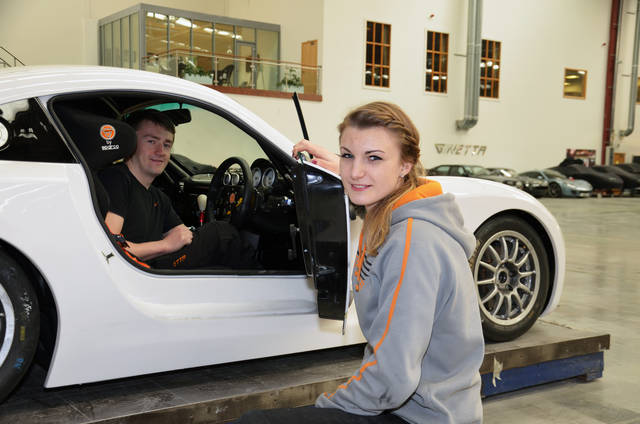 Hirst, 19, will enter the season in a Ginetta G40 built by himself and girlfriend Nicole Firth, an apprentice design engineer at Ginetta, which will continue to be fully prepared by the couple at all seven of the Ginetta GT5 Challenge meetings.

Since then, Hirst has earn’t himself at fine reputation at Ginetta, having been handed a full-time role with the manufacturer in November 2013 as a build engineer. ““The relationship between Ginetta and Easykart offers a genuine route for karters to take that next step into car racing as they both offer drivers to be competitive whilst still sticking to a modest budget”, Hirst said.

“By working at Ginetta, I was able to build my own Ginetta GT5 Challenge car alongside Nicole, and together we will run the car in the championship.”

Ginetta Chairman, Lawrence Tomlinson, expressed his delight at Hirst’s graduation into a GT5 Challenge race seat for 2014. “I have watched him make a name for himself in karting and I have no doubt he will impress behind the wheel of the Ginetta G40.

“He and his partner Nicole have done a great job in the workshop building various G40’s over the winter and I am sure their experience will be put to good use as they run the car as Privateers in 2014.

“Luca is a prime example of how working hard and never taking no for an answer can help progress your career – in whatever field that may be – and I am sure he will be a part of an integral part Team LNT for years to come… Watch this space.”

Hirst will join 23 other drivers on the GT5 Challenge grid at this Easter weekend at Oulton Park for the opening three races of the 2014 season.