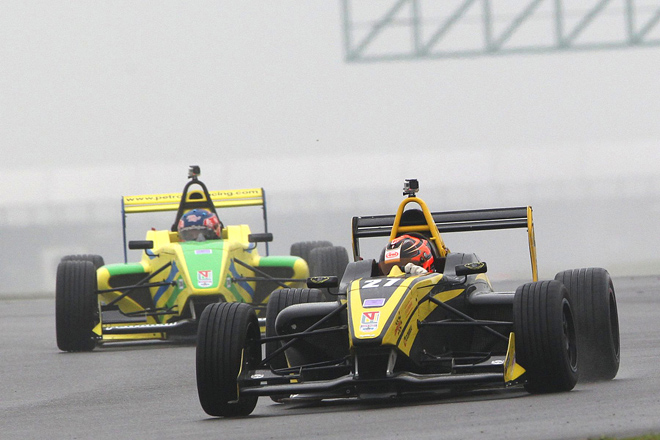 Sean Walkinshaw Racing’s Nicolas Beer has topped the first official test of the new BRDC Formula 4 Championship at Silverstone. The Dane set his fastest time of the test day in the morning session which was by far the most suited to quick times. The already wet conditions deteriorated throughout the day.

Gustavo Lima took second for Hillspeed, 0.192 seconds off the pace of the SWR driver while Falco Wauer’s Enigma Motorsport run machine found fourth place. Diego Menchaca grabbed fourth for Douglas Motorsport despite topping every session but the first. George Russell, who made his BRDC F4 debut in the test, took fifth for Lanan Racing with a time less than a second off the pace of the session leader.

Chris Dittman Racing came sixth thanks to Ginetta Juniors graduate Tom Jackson with his former rival from the GT series Will Palmer just behind in his HHC entered F4-013. Raoul Hyman was behind his team mate with Alfredo Zabalza for Hillspeed and Protyre Formula Renault champion Chris Middlehurst in ninth and tenth respectively.

Jordan Albert took eleventh for SWR ahead of MGR Motorsport’s David Wagner and Rahul Raj Mayer for Hillspeed. Arjun Maini for Lanan racing came fourteenth with the first of Petroball Racing’s Gaetano di Mauro. Charlie Eastwood for Douglass and Sennan Fielding for HHC came next with Diego Borrelli of SWR in eighteenth.

Struan Moore for Lanan and Roderigo Fonseca for Douglas rounded out the top twenty while Michael Claessens, MGR’s late signing took 21st, almost ten seconds off the pace. Only Petroball’s Dan Roper was slower, 12.320 behind Beer in the top spot.

Beer said, “First practice was quite good with plenty of free laps to really push the car to the limit and see what it felt like. After that it was very tricky on track with the conditions, but it’s good to be fastest at the end of the day, it shows we have pace.

“I’ve always liked the wet, but not when it’s too wet! But I always go well when it rains and I’m hopeful that if conditions remain the same for the rest of the weekend I can take some really good results.”