Russell Delighted with Victories on Debut 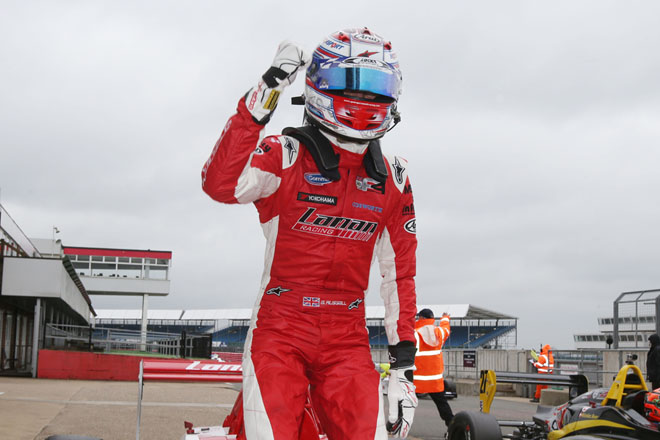 Car racing rookie George Russell claimed back to back victories in the BRDC Formula 4 Championship at Silverstone this past weekend and heads to the second round of the series at Brands Hatch in the championship lead. The 16 year old from Wisbech was making his car racing debut at the opening round of the single seater class and was still learning the Grand Prix layout at the Northamptonshire circuit when he took fifth in the first race on Saturday and two inspiring victories on Sunday.

He now leads the championship by thirteen points and is looking to round two at Brands Hatch to score more. Russell offered this critique of his double race winning Sunday:

“We’d chosen this race to use our four new tyres and when it started raining I couldn’t get any heat into them. I came to the grid and they were still totally cold. The guys all around me on the grid had used tyres, which is better when it’s slippery, and to top it all there was oil from a previous race on my side of the grid!

“I made a really bad start, down to seventh, but into Vale I made up three places and then just picked them off step by step to get into the lead.

“I got my head down, kept pushing and opened the gap up,” he said. “After a few laps half the track was dry and the other half wet, so being the first car it was hard to know where the grip was. From that point I kept it chilled and just didn’t want to risk anything.

“I wasn’t expecting to be in the top two,” he said, “but I got a good start and moved into third after running three-abreast through Stowe and Vale.

“I started catching the two leaders, and Sennan Fielding spun off while fighting Nicolas Beer, and that put me up to second. I caught Beer through Chapel Curve and onto the straight, but he squeezed me towards the grass. So I went to the outside into Stowe and kept it pinned to pass him, although I got a bit sideways as I went through!

“Then I kept pushing and opened the gap and it was another win – a fantastic job by Lanan Racing, because we had a one-two with my team-mate Arjun Maini in second place.”

Before Russell and Lanan Racing head to Kent for the next round of the youngster’s full season drive, George is heading to France. He is taking part in the second round of the Formula Renault 2.0 ALPS series on the streets of Pau. Russell will race a Koiranen GP run car for his maiden Formula Renault outing.