Zelos: “It Was One Of The Best Weekends Of My Life” 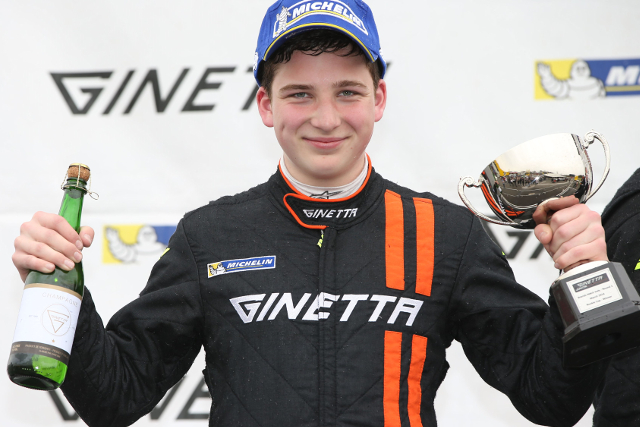 Dan Zelos has expressed his delight with the pace he showed during the first rounds of the 2014 Ginetta Junior Championship, the rookie shining with a top five finish in the live-televised second race.

With a run in the 2013 end-of-season Winter Series and a strong pre-season testing programme under his belt, the JHR Developments ace hit the ground on the opening weekend at Brands Hatch.

The 15 year old qualified around the bottom of the top ten for both races, but his first race got off to a disastrous start as he stalled on the grid. Bouncing back well, he pulled off some good overtaking moves en-route to fourteenth at the finish.

In race two, Zelos managed to avoid some chaos ahead going into the first corner to scythe his way through from tenth to fifth. Moving up to fourth following a rivals mistake, he nearly grabbed third at half-distance, however slight contact cost him a couple of places. Regaining fifth straight after, he held that place to the end to secure the Rookie Cup honours for the race.

“It’s a big and very strong grid in Ginetta Juniors this year, with a lot of competitive drivers out there,” said Zelos. “To be immediately on the pace in practice was a massive confidence boost, and whilst I was disappointed with qualifying, my JHR Developments crew worked really hard to improve the car for the races.

It was a shame about the stall in race one. I was really annoyed with myself, but I got my head down and treated the rest of the race as overtaking practice. Thankfully, race two went a lot better. I reacted quickly to squeeze my way past the collision at Paddock Hill Bend and after that, we were fast enough to fight for the podium, which was hugely encouraging.

“Overall, I really enjoyed the whole experience – it was one of the best weekends of my life. I learned so much, worked really well with the team and generally just felt like I was meant to be there.”