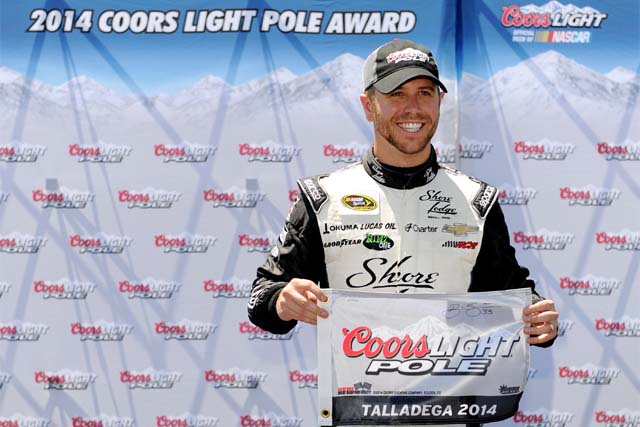 Scott, who drives the #33 Chevrolet for Circle Sport Racing put in a lap time of 198.290mph to take pole in only the fifth Sprint Cup start of his career. Scott managed to turn in such a fast lap thanks to a mammoth draft from Paul Menard at the back of a six-car pack of cars, all of which were affiliated with Richard Childress Racing.

As a result, the top 6 positions in qualifying were filled by RCR or RCR-affiliated teams, with Menard, AJ Allmendinger, Casey Mears, Austin Dillon and Ryan Newman taking the front three rows of the Aaron’s 499.

“They told me I was going to run with all the RCR cars, and I said ‘perfect, it just makes sense,’ “ said Allmendinger. “I think it just shows the more cars around here, you get more cars in a line is going to be faster. The great thing about RCR and the ECR package is we are all even. So it’s not like we think their cars are faster. It just made sense to get us all lined up and get us all in a pack.”

It wasn’t all plain sailing for RCR’s allies, however, with the #78 Furniture Row Racing Chevrolet of Martin Truex Jr. failing a post-qualifying inspection, forcing him to start from the back of the grid. He will be joined by Kasey Kahne, who’s #5 Hendrick Motorsports car was found to be underweight following qualifying.

Only one of the final top-12 contenders for pole was not a Chevrolet powered machine, with Carl Edwards bringing the #99 Ford into the frame, but could only manage tenth. Danica Patrick, Kevin Harvick, Kurt Busch, Edwards, Jeff Gordon and Tony Stewart completed the positions from 7th to 12th.

There was much discussion before the race that some drivers would play it safe in qualifying due to the nature of plate racing, where qualifying ultimately doesn’t matter as it’s far from impossible to storm from the back of the pack right to the sharp end. However, once the track was open and the drivers were in their element, most went for a fast time aiming to get as far up the pack as possible and get a decent pit stall for the race.

“Ego and pride,” said Brad Keselowski, explaining why he went out for a fast time. He qualified 13th, the fastest driver to miss the final shootout. “Yeah, it can be expensive, but that’s what we’re here to do. Racing is expensive, so wrecking goes with it. That’s part of the risk versus reward proposition.”

By Justin Nguyen
2 Mins read
Live Fast Motorsports, a new NASCAR Cup Series team owned by Matt Tifft and B.J. McLeod, will field the #78 in 2021 for the latter.
NASCAR

By Justin Nguyen
2 Mins read
Chase Elliott, Justin Allgaier, and Zane Smith have been named the NASCAR Cup, Xfinity, and Truck Series Most Popular Drivers for 2020. This completes a clean sweep of the award for Chevrolet.
NASCAR Cup SeriesNASCAR Xfinity Series

By Justin Nguyen
1 Mins read
Joe Gibbs Racing has switched around their crew chief/driver lineup for 2021, with Kyle Busch’s crew chief Adam Stevens joining Christopher Bell, while Busch will work with Ben Beshore. Jason Ratliff and Dave Rogers will move down to the Xfinity level, while Chris Gayle will lead the multi-driver #54 team.