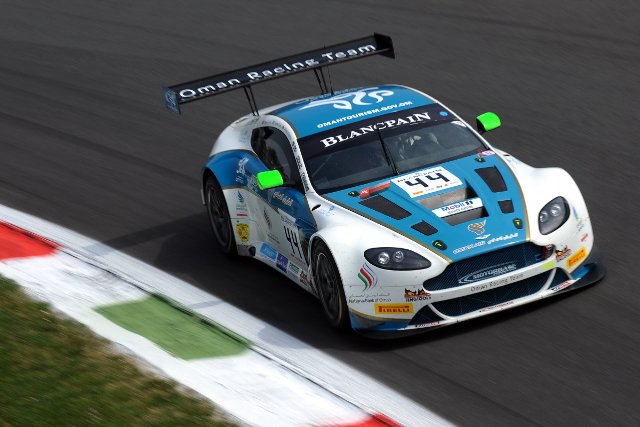 Following a strong series debut at Monza the Oman Racing Team are hunting a top ten as the Blancpain Endurance Series arrives at Silverstone.

This weekend’s race takes place on home soil for the Kent based team, which runs a single Aston Martin Vantage GT3 in the Pro Cup category for driver Michael Caine, Stephen Jelley and Ahmad Al Harthy.

The trio were closing in on a top ten finish in the season opener before an electrical issue forced them into retirement but hope that all three drivers will be able to use their experience around the Silverstone Grand Prix track to secure a top ten finish from Sunday’s three hour feature.

“Silverstone GP Circuit is a fantastic track, I always enjoy racing there,” said Al Harthy, who was one of the drivers in the team that won the Gentlemens Trophy class at Silverstone last season. “We were very unfortunate to miss out on the points at Monza, but the pace we showed – race pace in particular – was very strong and that gives us a lot of confidence going into this race.”

“It’s definitely going to be a big weekend for all of the guys at Motorbase and, of course, Michael and Stephen being the British round. Blancpain is an incredibly challenging championship, the competition is of the highest standard and you always have to be at the top of your game.”

This weekend is the first half of a Silverstone double-header for the team, with the Avon Tyres British GT Championship at the track the following season. In their first season working with the Aston Martin the team will be gathering data during the Blancpain weekend, preparing for the domestic championship during the international weekend.

www.theCheckeredFlag.co.uk will have full coverage of both the Blancpain Endurance Series and British GT weekends.