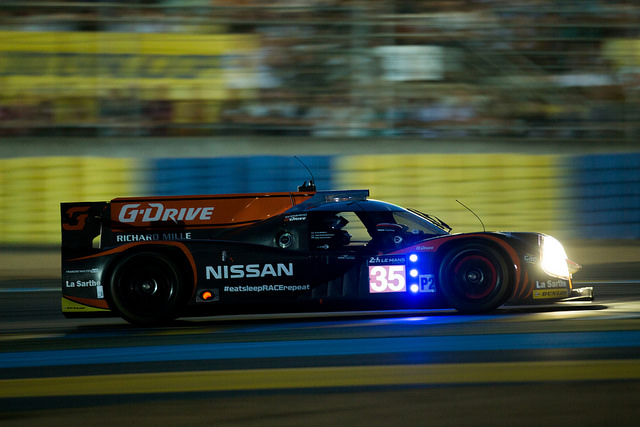 The 24 Hours of Le Mans officially descended into night in this the ninth hour of the race and the drivers in all classes started to settle in as Saturday turned into Sunday.

At the head of the field it is Alex Wurz leading the dominant #7 Toyota he shares with Stephane Sarrazin and Kazuki Nakajima who has barely looked troubled as he became mister consistent and just kept putting in trouble free laps.

Behind are the pair of Audis with #2 of Fassler/Lotterer/Treluyer sitting around 1min45sec behind the Austrian with Marc Gene sitting a lap down in third place in the #1.

The Porsches are holding safe in fourth and fifth but both cars have become sloppy at points with both cars going straight on at Arnage at different points of the hour.

However, the biggest disappointment had to come from the garage of the #8 Toyota. Nicolas Lapierre was fighting to get back in contention when the car was pushed into the garage to look at reports of aero balance problems which set them back a whole host of laps.

In LMP2 it was a hotly contested battle as Jann Mardenborough in the OAK Racing Ligier controlled the race but Panciatici in the Signatech Alpine was matching the Brit blow for blow as Franck Mailleux in the Race Peformance Oreca tried to make something happen from his standing in third place.

Compared to the previous hour, LMGTE Pro was a lot quieter than many expected with the #51 AF Corse slipping down to third with Gianmaria Bruni behind the wheel of the prancing horse.

Ahead of him was a scrap that saw many dreaming back to the days of GT1 as Stefan Mucke in the #97 Aston Martin and Oliver Gavin in the #74 Corvette fought for the lead of the class – the end result was both men sharing the lead for much of the time but Mucke making it stick as the clock ticked over into another hour.

One car that has probably seen its charged cut off is the #91 Team Manthey Porsche. Running adequately in the midfield of the class it spent the last twenty minutes of the ninth hour in the pit lane with no sign that the problem is about to suddenly get any better.

Finally is LMGTE Am and it is clear to see that Aston Martin are pacing the field with the #98 of Pedro Lamy running ahead of the #95 of Nicki Thiim.  A distant third place is SMP Racing and with a gap over two minutes they will be hoping for some good luck to befall them to make a win out of this situation.

By Alice Holloway
3 Mins read
12 Hours of the 24 Hours of Le Mans have been raced, and it’s two-by-two at the front of the field.