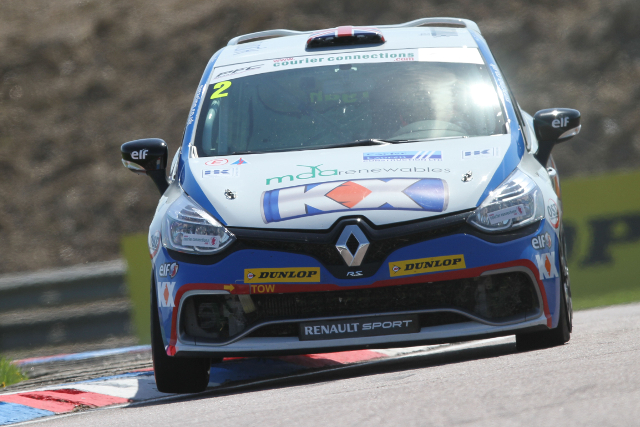 Since I posted my first blog on TCF, it certainly has been a rollercoaster of a ride in the Clio Cup for me. After starting the season in such a positive way at Brands Hatch with two pole positions and two race wins, I headed to Donington Park with a lot of expectation and confidence to deliver the same performance.

Unfortunately it wasn’t meant to be and I started the weekend off with a number of issues which continued into qualifying, leaving me with an uphill struggle in the races with two mid-pack starting positions.

Race one was the first wet race of the season and I was looking forward to getting stuck into a battle in conditions which I really enjoy. After a hard fought race I could only manage a sixth place finish though which wasn’t the end of the world but a bit disappointing to say the least. 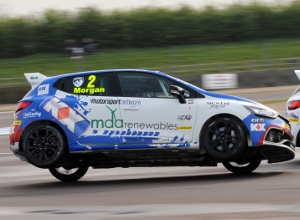 With that in mind I was pumped for race two and after making one of my best starts ever, I climbed from the third row on the grid to second into the first corner. It wasn’t just me that had a good start as all my KX teammates were occupying places 1 – 4 a few laps in and so it was looking like it would be great finish for the SV Racing KX team, but there was plenty of racing left that could interrupt that!

I had some great, close racing with my Akademy teammates Ash Hand and Ant Whorton-Eales throughout the race, and after a few too many off track excursions, I ended up slipping to third place by the time the flag dropped. The racing was some of the most exciting to be involved in and I can’t imagine how it must have appeared on TV………Clio racing at its best for sure!

I still can’t quite believe Ant and I ran two abreast from Redgate to McLeans without any shunts but credit to him for keeping it clean. With a podium finish in race two, it was a positive end to the weekend and I left Donington Park as championship leader and looking forward to Thruxton.

In between Rounds Two and Three of the UK Championship however, I had managed to put together a last minute deal to compete in the Eurocup Clio Championship at Motorland Aragon with SV Racing. I was mega excited but I knew the experience would be a tough one as neither the team or I had ever seen the circuit or run the different tyre make (Michelins), nevertheless we were pumped to make an impact!

Despite having two forty minute practice sessions, with the lap being so long I only managed to complete eighteen laps of testing which worked out less than a lap to learn each corner, but after an evening of analysing data in the back of a van with Danny Buxton, I felt ready for qualifying. The session didn’t quite go to plan due to extensive yellow flag periods and I ended up having to start race one from 17th on the grid out of 24 cars. 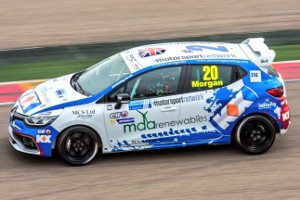 With only points up to tenth place I knew I had my work cut out and as the race got underway, it turned out to be every bit as chaotic as I had expected! I put in a gritty performance however to battle up to 12th place and brought the car home in one piece which was hugely important with Thruxton one week away.

With the experience of race one, I was a second quicker in qualifying two but it was still only enough for 13th for race two. I got a clean start however and managed to steal a few places by the end of the first lap and eventually broke into the top ten before being taken off the track on the penultimate corner losing three places.

I was gutted but there were still laps to go and I wanted to get back in the points. After latching onto the back of a recovering Josh Files, I followed him through the pack and fought my way back into tenth on the last lap to snatch a couple of vital championship points.

I really enjoyed my first Eurocup experience and we made great progress despite limited track time, so I’m confident when the next weekend at the Nurburgring arrives, we’ll be better prepared.

With Thruxton in mind, I was confident of a strong performance as we had already had official testing three weeks previously and I was quick. Unfortunately qualifying drama hit as my brake line burst giving me zero braking into the first complex. After narrowly avoiding Ant, I crept back to the pits and was forced to sit out the rest of the session. It was a disaster start and I had bagged eighth and tenth for the races……..great!

Heading into race one, I knew the first lap would be crucial if I was going to salvage decent points but after making a great getaway, my luck quickly ran out heading to the last complex after Church. I slotted in behind Ant and pushed him through in front of a Rivett/ Stilp train on our inside, and into the braking zone Rivett tagged Ant and then clipped my rear sending me into the tyres. 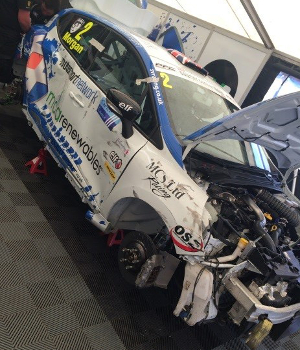 The impact was a lot harder than expected and I knew instantly it was race over and probably a written off car. It was disastrous for my race weekend and for the championship but with only four hours until race two, my concerns turned to getting the car out in time.

The team did a fantastic job to get the car as straight as possible and we made it to the grid just in time. I had a huge sense of relief until Danny said to me on the grid “I have no idea how this is going to handle but do your best and bag some points”. Yet another great pep talk from the boss!

I was ready to make amends for race one however and it turned out to be another epic encounter with plenty of overtaking. After a long, hard fought battle, I managed to climb up to fifth place by the end and was only 0.1 seconds off fastest lap so not a bad effort considering the chassis damage.

With a new car for Oulton Park, I left Thruxton eager to get back to winning ways……….but I knew I had four weeks to wait! That time has flown by however and in that time, I’ve had two KX Akademy training days (a factory tour of the drinks production unit in Pontefract and social media training with Harkable in London).

The off track experiences that I and the rest of the Akademy drivers have been to were brilliant and I’m looking forward to putting the good skills into practice…….so follow my Twitter, Facebook and Instagram accounts to see that marked improvement and to stay fully up to date with my racing exploits!!

Most importantly to drivers and fans though, it’s RACE WEEK! I can’t wait to get on track and this year we are doing Oulton Park International which means……..Shell Hairpin! What an awesome track and one that really separates the men from the boys. 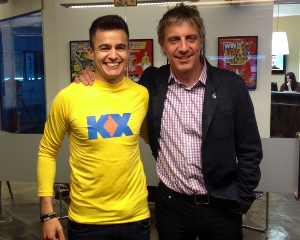 Morgan Got His First Yellow Jersey For His Brands Victories

Heading to Oulton my thoughts are firmly on making an impact straight away in practice one and to getting my Championship bid back on track. Plus, with another prize on offer for the Akademy boys, you’re bound to see some close, tough racing as we battle it out for the next #yellowjersey!

Another race weekend also means there’s KX Question Time, so if you’re looking to get up close to the BTCC and Akademy drivers, come to the event at 18:30 on Saturday to get their thoughts and reactions first hand. It’s great to watch the drivers being put on the spot and having to answer the most awkward questions the crowd can give, so get thinking about questions now!

By Team TCF
3 Mins read
What a fantastic start to the season it has been! We are now six rounds into the fourteen round SEAT Leon Eurocup…
Alex Morgan Blog

By Team TCF
2 Mins read
In his latest blog for The Checkered Flag, Alex Morgan discusses an uncertain winter and his thoughts on this weekend’s Seat Leon Eurocup season opener.