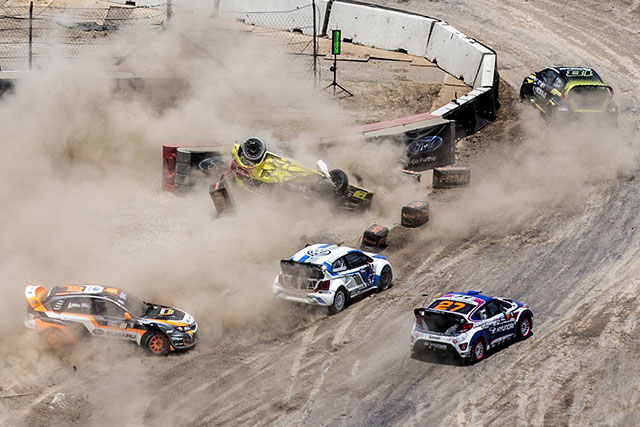 X Games gold medal favorite Tanner Foust was unlucky to miss out on a spot in the final as the Red Bull Global Rallycross Championship headed to Austin, Texas.

Foust was on-course for the final after dominating his heat races and progressing to the quarter final to race against Patrik Sandell, Toomas Heikkinen, Bucky Lasek and Emma Gilmour.

“Once again, I’m super impressed by how the Volkswagen Andretti Rallycross team has prepared our team cars,” said Foust, “Our Volkswagen Polos are the two best cars on the track.”

Foust was on pace from the start of the quarter final and flew away in to the first corner, unfortunately for the two-time GRC champion he race would end there as the transition from tarmac to dirt forced him out wide, sliding towards the gravel trap, as the VW slid it caught the edge of the gravel trap, pitching the car in to a slow flip. Foust would emerge from the car unharmed but out of the running.

“I tried to keep it on the track but when I got into the soft gravel, the car started a slow roll and that was it,” said Foust. “The car’s fine, but I’m gutted.”

“The nature of the format means there’s an air of desperation at the start line. Every heat felt like a Final, and the carnage on the course showed that.”

As Foust retired from the race it marked the first time in his X Games history that he would miss the final. Joining him on the sideline for the final were some other familiar X Games contenders in the shape of Ken Block and Travis Pastrana.

While Foust could no longer continue, team-mate Scott Speed took another dominant win to make it two-out-of-two for the 2014 season.

“Congratulations to Scott on a great weekend, oour cars are amazing and the other teams are on notice: the Volkswagen Andretti Rallycross team is going to be tough to beat all season.”

GRC moves on to Washington DC for the next round in two weekends time and Foust hasn’t given up. “I’m going to chase this championship down,” he added.

By Justin Nguyen
6 Mins read
What do Daytona 500 champ Austin Cindric and Robby Gordon have in common? They’re the only drivers with NASCAR Cup Series wins and X Games medals. Thanks to rallycross and Stadium Super Trucks, the NASCAR/X Games overlap is quite deep.
Stadium SUPER TrucksX Games