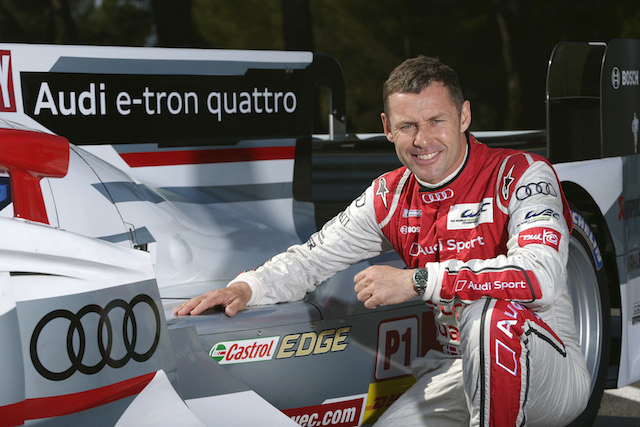 Since 1997 the 24 Hours of Le Mans has seen a one man whirlwind take the race by storm on an unprecedented scale – flying Dane Tom Kristensen.

In what will be his seventeenth race this coming weekend, Kristensen should be everyone’s favourite to make the breaks needed to claim his tenth victory around La Sarthe – a run that started on his debut with a win in the Joest Racing run Tom Walkinshaw Porsche WSC-95.

His team mates that year were Michele Alboreto  and Stefan Johansson, but hands down his best team mates have been at Audi Sport. At both Audi Sport North America as well as Audi Sport Team Joest he had an unbroken spell of six races with Allan McNish and Rinaldo Capello that brought one win, one second and three third places.

Indeed with canny Scotsman McNish, and – after Capello retired – Loic Duval, he is the reigning Le Mans winner and the FIA World Endurance Champion, not bad for a 46-year-old.

This year Mr Le Mans is facing an old foe – Porsche – and he is doing it with a new team mate following the retirement of partner McNish so he will be looking for Loire Valley glory with Lucas Di Grassi.

Kristensen said of his new team mate: “He’s perfectly gelled with our driver squad and has been part of the Audi team for quite some time. We’re proud to have him on board. At the same time, Allan McNish is still with us in the background. He’s helping us and working to make some of the processes even more efficient. That gives us a good feeling.

“But car number 1 isn’t the only one that’s ready. Number 2 was running well on the test day too. Many outside observers were surprised by the lap times set by Marco Bonanomi in car number 3 – but we in the team weren’t. Filipe Albuquerque made a good showing on his first laps at Le Mans as well. So we’re ready for the race.”

Showing his dedication to the German marque he has driven an Audi every year this millennium apart from his 2003 victory with Bentley and even then the Speed 8 was an Audi in all but name.

However, it is interesting to note that Le Mans and Sportscar racing isn’t the only discipline that ‘TK’ has tried his hand at with solid runs in both the British Touring Car Championship and DTM.

Mr Le Mans was also a regular in the Audi A4 DTM Credit: Audi

His one season in the BTCC – racing the Honda Accord Super Tourer for WSR – saw him finish seventh in the standings following three race victories, one at Oulton Park and a double at Silverstone at the last meeting of the season. That would be his only season in the series, which dropped Super Touring rules the year after.

That lead into a six season spell in the DTM – via a season in the American Le Mans Series – where two third places in the championship standings was the fruits of his labours.

Now though he will be hoping to bring his wins into double figures when he takes to the #1 Audi R18 E-Tron Quattro on Saturday 14th June. Www.TheCheckeredFlag.co.uk will be covering the race live with our team of writers providing hourly updates and live tweets both on the site and at @TheCheckerFlag

By Fergus Mckie
4 Mins read
The FIA has released the full entry list for the 2021 FIA World Endurance Championship.
24 Hours of Le MansIMSA