British Rallycross Round 5. The British Rallycross Championship made its second visit to the home of Rallycross, Lydden Hill. Where the main challenge for everyone was to be the weather. It started to rain during free practice and got progressively worse as the day wore on. To sum it up it was quite possibly the worst conditions for racing in living memory.

Right from the first heats it was plainly obvious that Ollie O’Donovan would be satisfied with nothing less than outright victory. He drove his Ford Focus to the absolute limit and deservedly claimed the top step. However Julian Godfrey took second place which was enough to secure him the 2014 MSA Supercar title equaling the record of Dermot Carnegie. The ever popular Steve Hill took the remaining spot.

Three other 2014 championships were also decided at the penultimate round.

Firstly Craig Lomax clinched the Hot Hatch title with an emphatic win over a highly competitive field. Asked afterwards ‘We are over the moon it has been a real team effort all year, with everyone in the team doing their bit’

In the RX 150’s Marc Scott continued his domination and claimed his second title in a row. posting on Facebook ‘Came away with another victory and with it the 2014 british RX150 Rallycoss title, Buzzing is an understatement’

Marc Scott an emphatic win to secure another title

The BMW title was also decided with David Bell taking the title ‘Its been 10 years in the making so I would like to say a massive thank you to all the people that have made it possible and helped me over the years.’ Said a very happy Bell afterwards 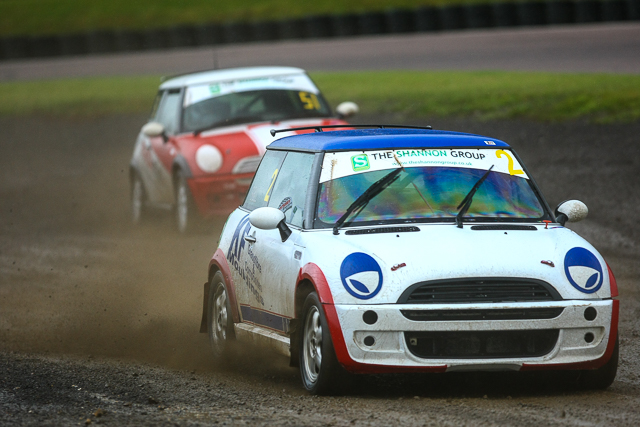 David Bell took the honors in the BMW Mini

The hotly contested Supernational class gave great racing from a wide variety of cars. It was Dave Bellerby that drove to a win in the final. With Super1600 driver Jack Thorne in second showing a mature drive and visiting Dutch driver Louis De Haas in third.

A bumper Suzuki Swift entry was most definitely one of the most watched racing of the day. Local driver Rob Maynard making the A Final after winning the B Final. It was the Start of the A Final that proved to be controversial. Pole sitter Chris Mullen and second placed Tristan Ovenden both made great starts but it was Sittingbourne based man Darren Scott that made a flyer from the second row. however with all three vying to pull away Mullen was clipped form the rear which sent him veering across the front of the whole grid causing everyone to take action to avoid contact. It was Ovenden who was best placed to seize the opportunity and move into the lead with Dave Ellis hot on his heals. Ovenden however proved to hard to pass and took the flag with Ellis second and Scott in third.

In the Swift Juniors Charlie Bean made it 4 from 4 with a very good drive with Drew Bellerby  and Jake Taylor close behind.