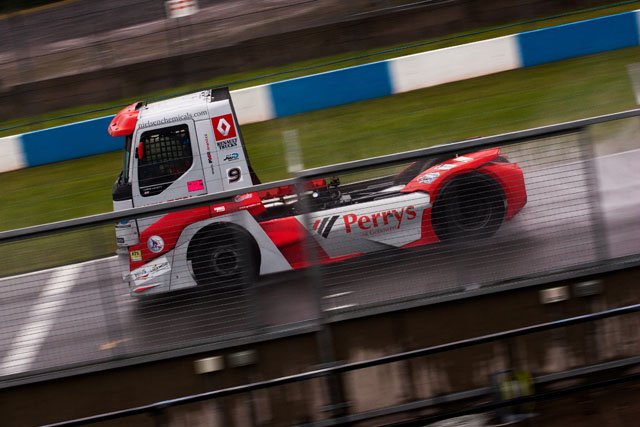 Monday morning arrived at Donington accompanied by a continuous mist of rain which became steadily heavier throughout the day. Still there was little to complicate matters for Christopher Levett who dominated the British Truck Racing Association Truck Racing Championship warm-up only to consistently fall short of victory in the three races on the programme. Once again the day belonged to the Renault MKR driver and his ex-factory team Renault Premium.

Two outstanding performances from the back of the class 1 grid were over-shadowed however by the big event of the day. Steve Rothery, the driver of the class 2 entered #29 Foden Alpha, was excluded from the entire meeting, including races past for assaulting a fellow competitor in the aftermath of race 4. The Kent based racer was also docked six points and had his licence suspended for thirty days, which means he cannot race in the fifth meeting of the championship at Snetterton in two weeks.

The warm-up was free from controversy though and Levett continued to dominate. A 2.678 second buffer sat between the red and white Renault and the all blue MAN TGX of defending champion Matt Summerfield. The #69 MAN of David Jenkins took third place ahead of the best of the class 2 runners.

Class 2 provided the variety all through the Sunday race programme and on Monday it continued. Steven Powell’s Foden Alpha topped the timesheets in the class with not only a substantial margin over his class rivals but four class 1 MANs to buffer too. Second in class went to the Sisu of Ryan Smith with Simon Reid’s Iveco Stralis in third place.

An example of the tricky conditions is that 21.874 seconds covered first to Ryan Colson’s Seddon Atkinson in 16th and last place.

The third of five races for the BTRA at Donington saw Christopher Levett make a stunning drive through the pack, battling mirror to mirror with each of the five MANs and the Scania of former European champion Stuart Oliver. Having started from the back row of the grid, Levett rocketed past the similarly equipped Ray Coleman along with all the other class 1 entrants barr Steve Thomas’ #33 MAN TGA.

That pass took until lap 3 of the ten lap clash and all the while the dueling pair were catching up to the class 2 traffic ahead. It was battling the slower trucks which finally split the Renault and the MAN apart and while Thomas made reasonable progress to place fifth, losing out Summerfield and Jenkins from class 1 and the Sisu of Smith in class 2, Levett left him for dust in the sixth lap.

After claiming the lead of the race from Smith Levett went on to build a conservative 3.559 second lead and hold station with Summerfield a further six seconds behind for second in the top class. Jenkins took fourth overall and third in class ahead of Thomas and Oliver who rounded out the main bulk of the class 1 body.

Simon Reid initially took the fight to Smith’s Sisu with his Iveco but lost out later on as the faster trucks came through. He found himself battling the #55 Renault MACK of Graham Powell for the final two podium spots in the second class, with the two crossing the line split by just over a second. Steven Powell followed his brother to place just outside the podium in his Foden ahead of Ricky Collett’s class 1 MAN.

Collett would have placed higher, splitting Reid and Powell rather than slotting into the comfortable gap between the last of the class 2 daycabs and the first of the bonneted Volvo Whites. He was hit with a ten second time penalty though, for being out of position on the start which didn’t cost him any class positions but drastically affected his overall standing.

Ben Horne provided intrigue too after he retired on the sixth lap of the race. Intially Horne made good progress though as the main body of class 1 began to pass the class 2 trucks for positon he was spotted running down the grass of the Exhibition Straight. No-one found the cause of the damage to his MAN but the entire drivers side bodywork behind the cab was missing as he pulled off on to the Grand Prix loop and into retirement. 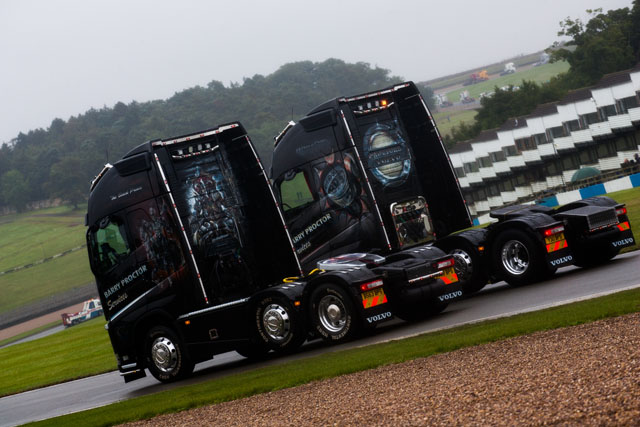 Even the 195 show trucks had to be careful of the weather (Credit: Nick Smith/The Image Team)

Following the lunch time entertainment, which came in the form of 195 show trucks, classic trucks and the race transporter trucks of the BTRA doing two parade laps, the fourth race of the weekend for the race trucks got underway. Immediately at the start there were problems, exacerbated by the rain which began to fall in heavier bursts. Stuart Oliver made a great start in the Scania P1150 to rocket from fourth on the grid to the lead going into Redgate for the first time.

That was where the Kelsa backed racer ran out of luck because as the wall of spray and smoke cleared, fifteen trucks headed to the Crainer Curves and one silver Scania sat beached in the gravel. The red flag was shown and all the trucks returned to the grid where controversy kicked in. Oliver was allowed to return to his grid spot even after the involvement of a heavy wrecker to drag his race truck from the gravel.

Fortunately all was forgotten in the fisticuffs which followed the race.

The second start was much cleaner, though Steve Thomas brought his truck to pit lane for replacement tyres on the drive axle. As the racing got underway the Team Thomas worked their hardest to change the 22.5 inch wheels, losing a lap in the process. Some truck racing teams are able to execute quick changes of truck tyres due to their participation in the 24 Heures du Camion or 24 Hour Truck Race at Le Mans on the Bugatti circuit.

Other incidents soon spiced up the action, though none more so than the clash between the #29 Foden and the #5 Volvo White of Adam Bint. The damage to the Volvo White indicates that ‘Binty’ hit the rear of Rothery going into the Goddards Chicane as the two battled for position on the fourth lap of the race. Rothery’s rage at the incident did spill over though as reported above.

The final result was another win for Levett with Ryan Smith’s class 2 Sisu in second palce. Summerfield again took second in class 1, this time with the Scania of Oliver in third. Oliver did make gains early on in the second attempt at the race but lost out to the defending champion in a firm but fair battle for position. 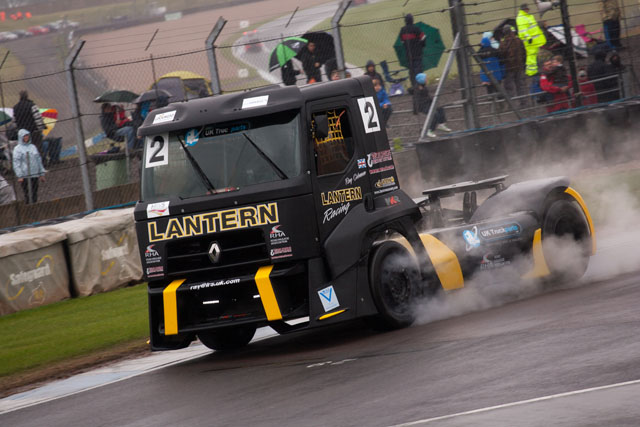 Steven Powell took second in class 2, displacing brother Graham who was later passed by the Iveco of Simon Reid. Ray Coleman was spared the final position by not only the delayed MAN of Thomas but the damaged Volvo of Bint.

Race 5: Class 2 to the Fore in Thrilling Finale

For the first time all weekend the rule which starts the class 2 trucks half a minute before the class 1 runners produced an interesting result. Both the top two positions on the overall podium were claimed by entrants from the lower class. The final race of the day was also by far the closest battle of the weekend with Ryan Smith only 0.672 seconds head of Simon Reid come the chequered flag.

Initially it was the Reid Freight machine which led the race with the Sisu working furiously to catch up and pass the red Iveco. It took seven laps for the move to be completed but even once the lead had changed Reid refused to yield the floor to the younger driver and dogged his rear nudge bar all the way to the flag.

Behind the leading class 2 battle, which set a podium completed by the Folden of Steven Powell in seventh overall, came the fight for the win in class 1. The battle was so hard fought that neither the victor, David Jenkins, nor the defending champ Matt Summerfield even managed to catch the class 2 victors. Jenkins was over seven and a half seconds behind the Iveco come the end of the ten lap race.

Jenkins was thrilled to have taken a victory in his home round of the championship, he was almos non-sensical with joy as the black and blue MAN pulled into parc ferme. Christopher Levett took third place in the class ahead of the Scania of Stuart Oliver.

There were remarkably no retirements from the race nor major issues during it though Ray Coleman’s ex-MKR Renault Premium, Adam Bint’s Volvo White and the Renault MACK of Graham Powell all sat out the race. Of course the banished Foden Alpha of Steven Rothery also didn’t take part. 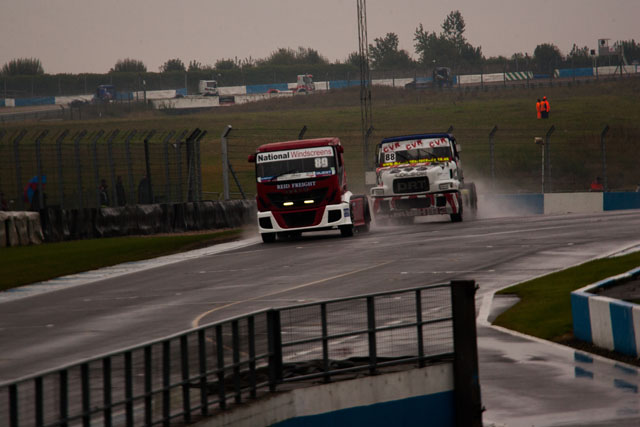 Three meetings remain the British Truck Racing Association’s season with the next outing coming on 6th and 7th September from Snetterton’s 300 circuit. While the long straights would appear to favour the MAN’s acceleration, the slick handing of the MKR run Renault will be much needed in the tricky stadium sections. Following Snetterton the series heads to Pembrey and then to Brands Hatch for the season finale in November.

The battle for the title couldn’t be any closer either with Matt Summerfield holding a single point in defence of his title over Levett. In class 2 there are only six points splitting the Sisu driving Smith from the Iveco wielding heavy haulage giant Simon Reid.

By Nick Smith
1 Mins read
Steve Rothery, the driver of the #29 Foden Alpha from class 2, has been excluded from the results of four British Truck…