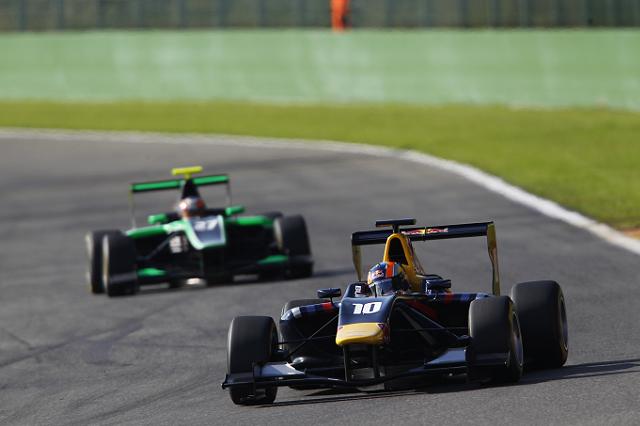 GP3 Series championship leader Alex Lynn left the Spa-Francorchamps circuit on Sunday having increased his lead in the standings over closest competitor Richie Stanaway to 32 points, with three rounds of the year remaining. The Red Bull Racing-backed Carlin driver took his third victory of the season, and the first race two win all year, on Sunday, after fighting with Status Grand Prix driver Stanaway during both races.

Lynn originally decided to start race one on Saturday on wet tyres, but knew that was the wrong move before the start, and dived into the pits at the end of the formation lap to switch to slick tyres. He had a race long battle with fellow pit lane started Stanaway, and fought through from the back to finish eighth.

“The track was obviously drying and it was clear we needed slicks but we were not allowed to change on the grid for the delayed start so it had to be in the pits at the end of the formation lap,” said Lynn. “I got out ahead of Richie but then we were both trying to force our way up through the field from last and he got ahead of me as it all got very hectic.

“When my engineer told me that we were up to eighth I thought, ‘OK so this is important’, I didn’t want to make any mistakes, I was still looking for a way to get ahead of Ritchie but he was defending seventh well. I’d picked up a bit of front wing damage that effected the straight line speed a little but wasn’t too much of a problem.”

The eighth place in race one gave Lynn the pole position for race two, and he made the most of it by taking his third win of the season. He was forced to fight for the win by Stanaway, who took advantage of a small mistake by Lynn to momentarily take the lead, but the Briton was back in front at the following corner, and was never headed again. However he was disappointed to miss out on the bonus points for fastest lap to Swiss driver Alex Fontana.

“Me and Richie were pushing each other very hard, I could see he was better on the brakes, I was trying to go as late as possible and got it wrong, I was so annoyed that he got past, I was determined to get him back straight away,” said Lynn. “As we went down the hill I had a look at going past and he moved over onto the wet to defend, I knew then he was in trouble as he was braking deep and that made him go wide and allowed me through again.”

“From then I just concentrated on doing absolutely everything I could to get away and managed to open up a gap. The track was drying and I knew we were all going faster, I was pushing for that fastest lap and the extra couple of points but I made a little mistake on the last lap and missed out.”

Looking back at Spa, Lynn felt he had a great car, but the rain in qualifying made the weekend more difficult, and he was happy to leave Belgium having extended his championship lead over Stanaway by a single point to 32 points.

“It was a more difficult weekend than I would have liked,” reflected Lynn. “The car was great all weekend, the Carlin guys did a fantastic job and we felt we had pace. With the weather effecting everything fifth wasn’t too bad from qualifying, we probably didn’t quite have the right pressure in the tyres when it came to the crucial time but we were confident for the races.

“We had also made some technical changes for the starting over the summer break and I think everything the guys did was a step forward so we are certainly looking forward to the next races.”