Carlos Sainz Jr: “We are Not going to Ease Off” 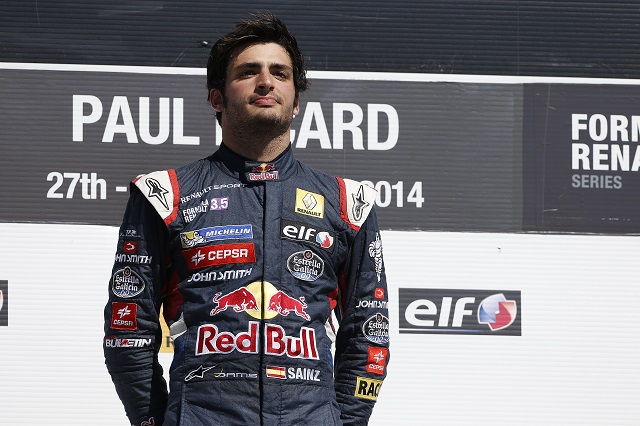 The DAMS team left Paul Ricard with an increased lead in both Formula Renault 3.5 Series championships after a dominant double victory for Carlos Sainz Jr in France. Norman Nato finished tenth in race one but was forced to retire in race two after an incident with the International Draco Racing machine of Pietro Fantin.

Sainz Jr had seen his championship lead eroded away by Roberto Merhi over the past three events, but the Spaniard put in a great couple of drives to leave Paul Ricard on the verge of the championship. He became the first driver in series history to win seven races in a season, and still has the opportunity to add to that record in the remaining races at Jerez.

“That is exactly what we needed at exactly the right time,” said Red Bull Junior driver Sainz. “It was a tricky Friday, we came with the baseline setting after the pre season test but the track temperature was completely different by about twenty degrees, the track was four seconds a lap slower and so we were way off (8th & 12th) in the collective tests.

“So we had a lot of work to do, the guys pretty much worked through the night to change the car, they did a fantastic job and it was great for qualifying, we had the pace we needed and that carried over into the race.”

After taking his sixth win of the season on Saturday, Sainz was even more spectacular on Sunday to waltz his way to his seventh win of the year despite missing out on pole position after a red flag, beating Pierre Gasly of Arden Motorsport by over twelve seconds.

“We were still learning and with some changes we found even more pace for Sunday morning qualifying,” said Sainz Jr. “We looked in good shape to take pole again, coming to the end of the session we had fast sector times but then the red flag came out at the last moment and that was it, the lap was ruined and we were left P2.”

“The front row was good enough, it was down to me to do my job at the start and I managed to get away and somehow get past Pierre even though he had got away well also and the first corner was very close. From there I just believed in the pace we knew we had in the car and as long as I did my side of things we were going to win.”

Sainz thanked the team for giving him the machinery to dominate at Paul Ricard, and insists that despite taking a 44-point lead over Merhi to Jerez in three weeks time, he will continue to push to seal the championship at the earliest possibility.

“The team did a perfect job with the early stop strategy and I have to say a big thank you to them for putting everything together this weekend and giving me a great car to drive,” said Sainz. “We are not going to ease off at all. I am going into my home race in Jerez looking to win both races.

“The Championship isn’t over until the last lap, there is no reason to change the way we are racing. It is like an exam, you have to go in aiming for A star, then if you miss you will probably still get a pretty good mark.”

Team-mate Nato had a less impressive weekend, although his first race charge through from seventeenth to tenth was notable. His second race was over early after suffering a puncture in a collision with Fantin that saw him retire, although he was not on course to match his top ten finish.

“The weekends follow one another, and unfortunately each one is different,” said Nato. “I’m very disappointed. I didn’t really have a good feel for the car in the first qualifying session, and in the second my best lap was spoiled by a red flag.

“But I have to look on the positive side, my comeback in race one with some great passes. I’m really determined to finish on a high note in the final round.”