Chadwick: “Things Didn’t Add Up In Our Favour” 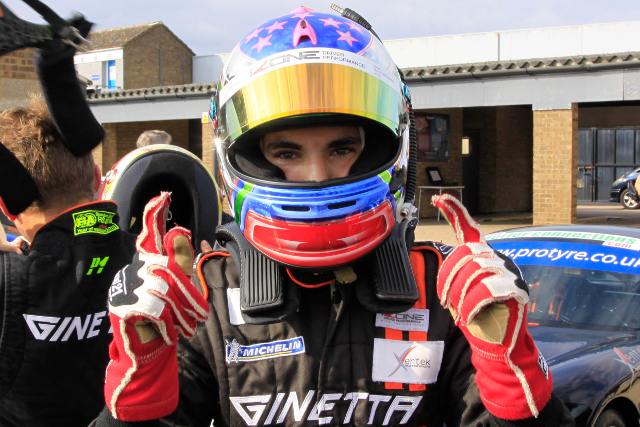 Ollie Chadwick feels that luck was against him in the Ginetta GT5 Challenge championship fight after finishing in the runners-up spot after an action-packed final weekend of the season at Donington Park.

Chadwick was part of an enthralling battle with former Ginetta Junior rival George Gamble and Dennis Strandberg throughout the season, the pendulum swinging back and forth between the three as they fought for the championship.

While Gamble eventually secured the title with a double win at Donington, Chadwick ended the season on a high with victory in the final race of the year that crucially secured him the runners-up spot over his Swedish adversary Strandberg.

“Taking the win is the best way to end a season, and the same way I ended 2013 at Brands Hatch,” said Chadwick, who took a double win on his Ginetta Junior swansong twelve months ago.

“It was an important race, we had to beat Dennis [Strandberg] and have a car between us to get second in the points. We got George [Gamble] in the end for the lead and that meant even though Dennis got third and we ended on equal points, race wins and statistics like that gave me the spot.”

Chadwick ended the season with the six race wins, fourteen podium finishes, eight pole positions and nine fastest laps to his name, and feels it was a case of luck not being on his side in the championship battle.

“Every meeting we’ve been to we’ve got a podium finish, so we certainly can’t be disappointed with our pace,” Chadwick reflected.

“There were just little things that didn’t add up in our favour over the course of the season, we got hit at Rockingham in the second race and had to start the third from the back, same again at Brands Hatch, and the race was cancelled at Snetterton when I was on pole and George was 18th.

“That’s motorsport though, luck isn’t always with you, and to come into the final rounds still fighting for the championship with two DNF’s is still pretty good.”

Chadwick competed this season with Xentek Motorsports and is full of praise for the team, who were set-up at the start of the year as a new division of JHR Developments, the squad that ran him in the Ginetta Juniors.

“The team have done a really good job in their first year in the championship,” he enthused. “TCR, Academy, Optimum have been out before in the series, so to come in as a new team to the GT paddock and be able to compete right at the front from the off is a real credit to how the team have prepared and the job they have done.”

The focus for Chadwick now naturally turns to what he’ll be racing next season, and the 18 year old is assessing his options for his fifth season of car racing.

“We’re looking at things at the moment for next season and I’ve got a test coming up here in a GT3 Aston Martin in a few weeks that will be a big opportunity for me,” he added.

“There’s the possibility to do the Challenge again for a reasonable budget, but there’s other options like a GT4 drive, maybe some endurance stuff in the G40. We’ll see what the winter brings, but I’ll definitely be out racing something good next year for sure.”

By Charlotte Hardy
1 Mins read
Lewis Ryder is confirmed to make his Ginetta GT5 Challenge debut in the coming 2019 season as a privateer entrant.