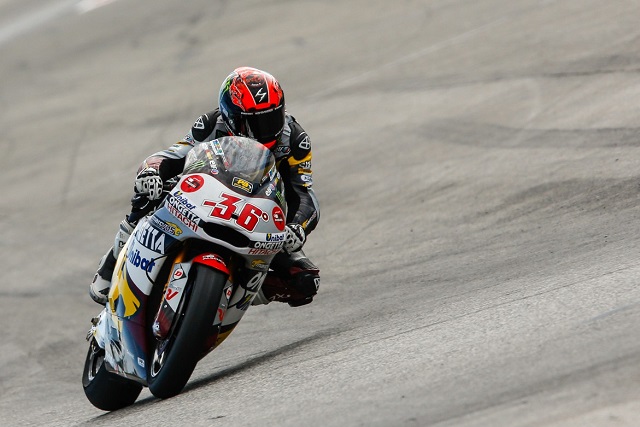 Mika Kallio came up with the perfect response to being beaten by Esteve Rabat in the British Grand Prix by pipping his title rival to pole position at Misano. The two Marc VDS teammates clinched another qualifying 1-2 but like in Silverstone, are likely to have stiff competition tomorrow with Thomas Luthi, Maverick Vinales and Dominique Aegerter all within two tenths of pole.

Luthi has been competitive whatever the weather has thrown at him so far this weekend and the Swiss rider set the early pace under sunny skies at Misano. The Interwetten rider led for much of the session, only to be usurped by Rabat fourteen minutes from time, triggering another inter-team battle at Marc VDS.

Rabat held provisional pole on a 1:38.110 with Kallio seemingly struggling to join him on the front row, let alone stake a claim for top spot. With three minutes remaining, Mika moved up to fourth behind Rabat, Vinales and Luthi but a stunning final sector on his next attempt lifted him 0.067s ahead of his teammate. Esteve had nothing by way of a response with his attention taken by traffic, particularly Ricard Cardus who was the recipient of a petulant kick from Rabat in the dying seconds.

Thomas Luthi came within four thousandths of darkening Esteve’s mood still further but ultimately had to settle for third ahead of Vinales and Aegerter while Johann Zarco couldn’t quite hit the heights of Silverstone, qualifying sixth for AirAsia Caterham. Cardus shrugged off his bust-up with Rabat to finish seventh ahead of Takaaki Nakagami and Randy Krummenacher while Axel Pons completed the top ten on his AGR Kalex.