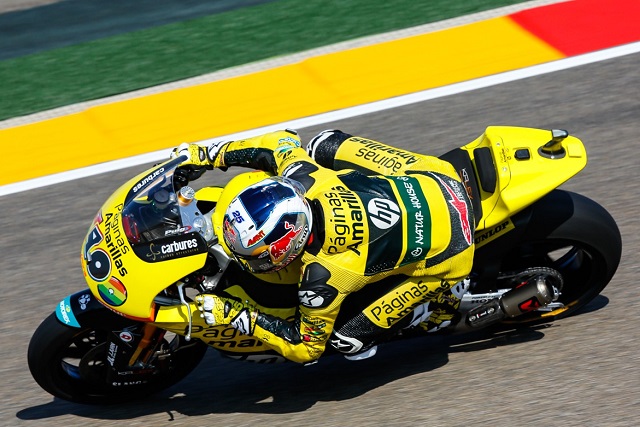 Maverick Vinales achieved another milestone in his exceptional rookie season by claiming his maiden Moto2 pole at Motorland Aragon. The Spaniard upstaged the championship challengers with a sensational late flyer, snatching pole from Johann Zarco with Mika Kallio and Esteve Rabat third and fifth respectively.

The session looked to running smoothly for Rabat who held provisional pole heading into the final ten minutes but everything changed when Zarco upped the pace. The Caterham rider was languishing down in nineteenth at one stage but back-to-back efforts lifted him to eleventh, followed by another leap up to second. The third lap of the stint saw his ascent to the top of the leaderboard completed as a 1:54.129 took him ahead of Rabat while Italtrans rider Franco Morbidelli all-but matched him to go second.

The Marc VDS response came from his title rival with Mika Kallio taking second, just 0.016s adrift, and the Finn went even faster next time around. Astonishingly though, his improvement wasn’t sufficient to overhaul Johann with the no.36 still six thousandths off the top. Instead it was left to Vinales to take the honours with a 1:54.073, backing up his impressive morning practice pace.

Zarco and Kallio will complete the front row tomorrow with Morbidelli between the Finn and his championship rival Rabat. Thomas Luthi will line up sixth ahead of Takaaki Nakagami and Dominique Aegerter while German duo Sandro Cortese and Marcel Schrotter complete the top ten.