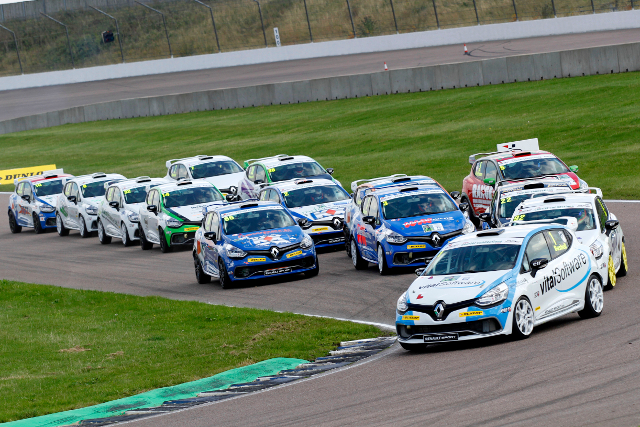 Mike Bushell heads into the final rounds of the Courier Connections Renault UK Clio Cup this weekend at Brands Hatch GP as the overwhelming favourite to secure the 2014 title.

The championship pendulum swung firmly in Bushell’s favour five weeks ago at Rockingham, with a double win for the Team Pyro ace being coupled with a nightmare outing for former points leader Josh Cook.

SV Racing’s Cook had topped the standings since Thruxton in May thanks to five race victories, however his title bid started to crumble at Knockhill when he could only fight to a pair of eighth place finishes.

A ten place grid penalty carried over from an incident in the second race there meant he was battling from the back in the Rockingham opener, and first lap contact in that one and a penalty for a jump start in race two has firmly handed the advantage to Bushell.

Bushell has been in scintillating form in recent meetings meanwhile, extending a run of consecutive pole positions to five at Rockingham. His two victories in Corby make it four for the season, and the 25 year old has only finished off the podium once in the last six races.

To win the title with a race to spare, Bushell will need to either finish ahead of Cook in the opening race or lose a maximum of three points to his rival. Otherwise, if he loses 27 points or less to Cook over the weekend he’s champion. A 28 point swing or more, and Cook will come out on top.

Mathematically, Jordan Stilp also heads into the season finale capable of winning the title, though with him sitting 47 points behind Bushell in the standings, he would need the top two to hit trouble to stand any chance of stealing the title away.

Realistically he is fighting for third in the standings with James Colburn and Ant Whorton-Eales. Stilp heads to Brands as favourite to take the spot, with the 20Ten Racing ace currently on a rich run of form, with six podium finishes in the last eight races including three wins.

Westbourne Motorsport’s Colburn has only finished in the top five once in the last four outings meanwhile, while Whorton-Eales has been more consistent but is still awaiting a first win of the year. Only two points separate them in the battle for a top four points finish heading to Kent.

One driver heading into Brands in determined mood is Paul Rivett. Back on the podium at Rockingham with his fourth second place finish of the season, the three-time Clio champion is determined to go one better and get an elusive victory to end his first season with WDE Motorsport on a high.

Rivett is also locked in a close battle with Lee Pattison for the Masters Cup honours. Pattison holds a three point advantage heading into the finale, meaning he will take the title if he finishes ahead of Rivett in either race, while Rivett will emerge victorious if he finishes in front of Pattison in both.

Any one of four drivers could take the Graduate Cup class title meanwhile, with just 17 points separating current class leader Cook, Stilp, Whorton-Eales and Colburn with dropped scores taken into the equation.

The destination of the Teams Trophy is already known though, with SV Racing with KX holding an unassailable 180 point lead at the head of the standings. Pyro are a comfortable second, with Westbourne to complete the top three.

Outside the class battles, reigning vice-champion Alex Morgan returns to the scene of his double victory on the opening weekend desperate to return to the top step of podium after a torrid season, having only taken one podium finish since with SV.

His team-mate Ash Hand will hope to challenge for a maiden Clio win after taking his fifth podium finish of the season at Rockingham, while Charlie Ladell will be aiming to add to his two top six finishes so far in his part-campaign.

The grid for the weekend is set to match the season high of sixteen at Knockhill, with JamSport expanding to two cars for Paul Knapp and Dan Holland, while Simon Horrobin returns for a second outing at SV alongside newcomer Paul Donkin, with fellow debutant Gary Jenner joining the grid at Westbourne in place of Devon Modell.

The new entries will get their first competitive action in qualifying at 11.20 on Saturday, before the first of the two pivotal final races of the season follows at 16.15 that afternoon. The season closer comes at 13.30 on Sunday

Full championship standings heading into the season finale can be found here.