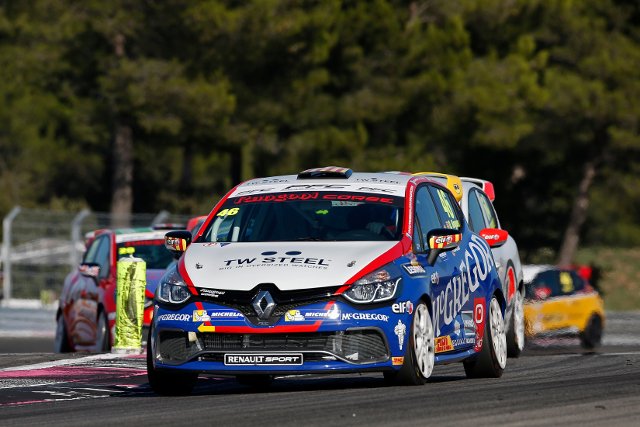 2014 Renault Eurocup Clio points leader Oscar Nogues has extended his advantage at the top of the championship standings with a fourth win of the season at Paul Ricard, in a meeting which also saw Mikel Azcona secure his maiden series win.

Eric Tremoulet started the opening race of the weekend from pole position, with Nogues joining him on the front row of the grid ahead of Azcona, Alex Morgan, Facundo Della Motta and Massimiliano Pedala.

2013 French Clio Cup champion Tremoulet led the field away, with Azcona and Morgan quickly slotting into second and third as Nogues slipped down the order after being tapped into a half spin on the opening lap.

The front two quickly broke away and started a fierce two-way battle for the lead that lasted the duration of the race. It came to a head two laps from the end, with Azcona finding an opening to grab the lead for his first series win.

“It was a good race,” said Azcona. “I got a good start thanks to me quickly getting into Eric Trémoulet’s slipstream. The both of us were able to pull away a little bit from Alex Morgan and I waited for a good opportunity to make the pass. I am thrilled with this first success!”

Della Motta ended up seventh ahead of the recovering Nogues and Salvatore Arcarese, while Villanueva finished two laps down in sixteenth after having to pit to repair some front end damage. Completing the top ten meanwhile were Renee Steenmetz, Stephane Polderman and Manuel Leon.

Alongside Morgan, Finlay Crocker was the only other British runner in the field with reigning UK and Eurocup Clio champion Josh Files skipping the meeting to make a guest appearance in the Porsche Carrera Cup GB.

The full race one result can be found here.

Azcona headed into the second race hoping to make it two wins from two, and started in the best position possible after setting a new qualifying lap record for the series to take pole position.

The Spaniard got off the line well and led a chase pack featuring Nogues, Tremoulet, Morgan and Villanueva. After trading the lead with Nogues a couple of times during the opening two laps, a missed braking point on lap three saw Azcona lose ground.

Nogues seized the advantage, but it wouldn’t be a clear run to the win. Nogues swapped the lead with Tremoulet a couple of times over the remainder of the race, before eventually taking the victory by half a second.

“I’m very happy with this result,” said Nogues. “It was like a motorcycle race, as we were so close to one another. I want to thank my competitors for their good sportsmanship in the battles, while we are all racing for the championship!”

The battle behind claimed a victim in Morgan, with heavy contact from Villanueva ending the Rangoni Corse driver’s race on lap four. Azcona took the final podium position on the road, however a penalty for turning his wheels on the starting grid dropped him to sixth.

This promoted Ivan Pulic onto the podium ahead of Pedala and Pablo Martin. Behind Azcona, Aldo Ponti, Steenmetz, Polderman and Leon rounded out the top ten, while Arcarese was left to settle for eleventh after a post-race penalty cost him a top six result. Crocker took eleventh, while Villanueva and Della Motta joined Morgan on the retirements list.

The full race two result can be found here.

The final rounds of the season take place in three weeks time at Jerez in Spain on October 18/19.