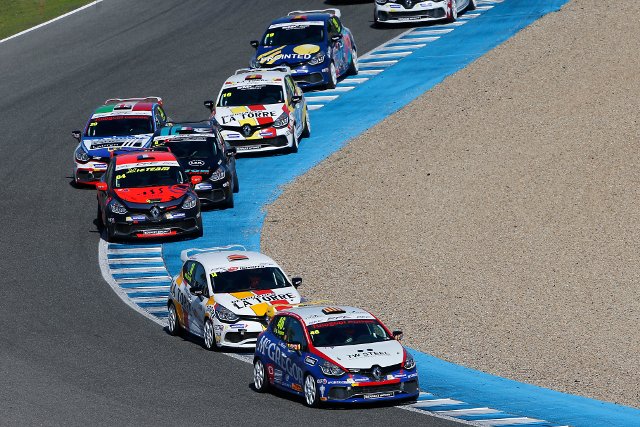 Oscar Nogues has wrapped up the 2014 Renault Eurocup Clio Championship title with his fifth victory of the season in the final meeting of the season at Jerez.

On the championship’s first visit to the Spanish circuit, Catalan native Nogues converted pole position into a win to clinch his second Eurocup title in race one, before fellow Spaniard Mikel Azcona took the honours in the final race of the season.

Nogues took pole for the opening race ahead of championship rivals Eric Tremoulet and Azcona, and while Nogues maintained his lead off the line, he was soon down to third with Azcona taking the lead.

On lap three, Nogues regained second from Tremoulet at the Senna chicane shortly before the safety car took to the circuit to allow for the retrieval of the Clio’s of early casualties Salvatore Arcarese and Han Hui Lin, the latter being one of a number of Chinese entrants for the weekend.

Nogues pounced for the lead shortly after the restart and went on to pull away for a 1.8 second victory, while Azcona kept Tremoulet at bay to make it a Spanish one-two on home tarmac.

The champion said: “I am very proud to win this second title in the Eurocup Clio because it is a very competitive category. We race against the best from the national cups and the competitiveness can be felt.”

The top ten was rounded out by Aldo Ponti, Ivan Pulic and Facundo Della Motta, while the second Brit on the grid Finlay Crocker took his first points-scoring finish of the year in fifteenth.

The full race one result can be found here.

Azcona was on pole position for race two, with Nogues joining him on the front row of the grid. A good start for both saw them maintain their positions around the opening lap, with Azcona getting an early lead from his fellow Spaniard.

Nogues closed up on the leader as the laps ticked off, but Azcona held off his more experienced rival to take his second win of the year.

“It is always special to win the last race of a season,” said Azcona. “I am very happy with my first year in an international championship. To finish second in a category as competitive as this is good and I can’t wait to comeback!”

Behind, Tremoulet held third in the early stages, with Pedala trying to attack for a podium place whilst also defending from Morgan, Della Motta and Martin behind.

Despite the Italian’s best efforts, Tremoulet went on to complete the podium. The remainder of the top six didn’t change either, with Pedala leading home Morgan and Della Motta.

Behind Martin in seventh there was plenty of action though, with Nikolay Gryazin, Arcarese and Pulic completing the top ten. Crocker improved on his earlier result with a season’s best fourteenth, just ahead of Rene Steenmetz who got a drive-through penalty for an early collsion.

The full race two result can be found here.

Hyundai test upgraded i20 and prepared for Rally Mexico

Second place on home soil for Veiby in Rally Sweden

Gryazin After Rallye Monte-Carlo Debut: “We Achieved What We Wanted”