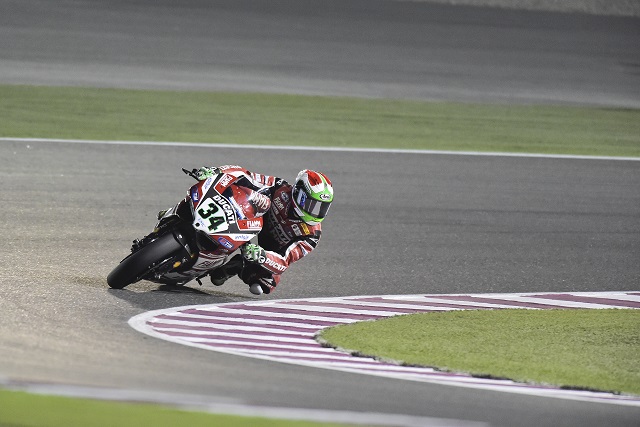 Davide Giugliano looks set to be the wildcard in the World Superbike Championship battle tomorrow after claiming pole position in Qatar. The Ducati rider edged out Kawasaki’s Loris Baz in Superpole with championship leader Tom Sykes rounding out the front row, two places ahead of his title rival Sylvain Guintoli.

The teammates are expected to play a key role in the outcome of tomorrow’s title decider, especially given the events of Magny Cours, but Marco Melandri didn’t enjoy the greatest of times on Friday, forcing him to take part in SP1 before having any chance of pole position. The Italian comfortably advanced to the second session with David Salom joining him in SP2 on his EVO Kawasaki.

Giugliano and Baz looked set to fight out a private battle for pole with both riders setting a blistering pace on their race tyres. Giugliano was marginally the faster after the first runs after setting a 1:57.868 but Baz responded superbly on his qualifying tyre, lapping within one thousandth of second of the Losail lap record to go fastest. Davide wasn’t finished yet though and the Ducati rider ensured Ben Spies’ 2009 record wouldn’t stand for too much longer, clocking a 1:57.033 to claim pole.

Sykes was setting some promising sector times further back but when Alex Lowes slid off just in front of him, the world champion lost sufficient time to leave him third, four tenths back. Crucially, the Briton will have Chaz Davies between him and his title rival on tomorrow’s grid with the second Ducati securing fourth, three tenths quicker than Sylvain Guintoli.

Leon Haslam will complete the second row after edging out Jonathan Rea, aided by a crash late in SP2 for the Ulsterman who had topped the final practice session prior to Superpole. Marco Melandri’s SP1 exploits only allowed him to climb as high as eighth but the Italian will have Eugene Laverty and Toni Elias behind him while Alex Lowes was left down in eleventh after his spill, only ahead of Salom’s EVO Kawasaki.