Rowland opts to remain with Fortec for 2015 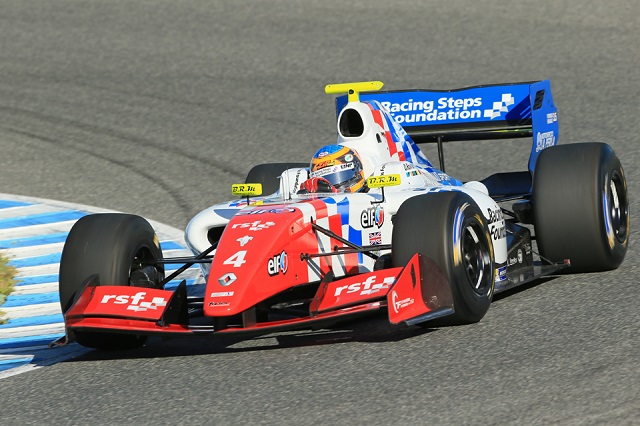 Briton Oliver Rowland will remain with the Fortec Motorsports team for the 2015 Formula Renault 3.5 Series season.

The Racing Steps Foundation have confirmed they will continue to support Rowland, as he looks set to be the highest placed returnee to the series next year having finished fourth in the standings in 2014 with two race wins, with his plans for 2015 being announced live on BT Sports by his RSF supporters.

RSF chief Derek Walters hopes Rowland will be able to kick on in 2015, and make a serious challenge for the title, but insists they will not be pressurising him too much.

“He’s cemented a really good relationship with the team, especially his engineer,” said Walters. “We want to build on where we’ve ended up, and hopefully go off and win the championship – hopefully by mid-season!

Rowland himself felt a second year in Formula Renault 3.5 Series was his best option, with a shot at the title his goal. He took wins in Aragon and Jerez in 2014, but felt he should have achieved a better finish in the championship than fourth, something he hopes to rectify in 2015.

“I had a good year and I could’ve been second quite easily,” said Rowland. “Hopefully next year I’ll get a good crack at it and really show my potential.”

Those ahead of him in the 2014 standings are all likely to move on. Carlos Sainz Jr has been heavily linked to the Scuderia Toro Rosso drive in Formula 1, while another Red Bull-backed driver Pierre Gasly is hoping to switch full time to the GP2 Series, possibly with DAMS. Roberto Merhi has also hinted that he is likely to quit the Formula Renault 3.5 Series.