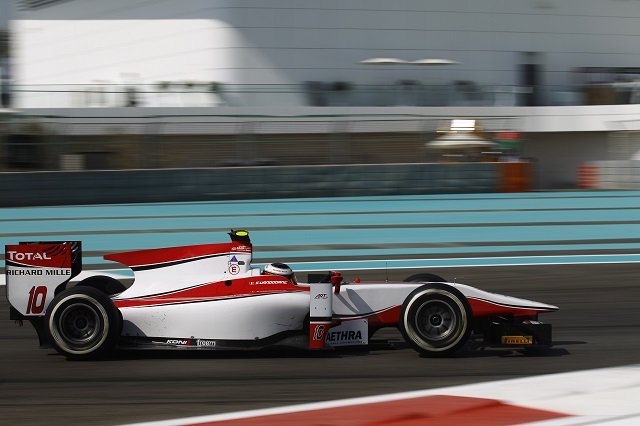 Stoffel Vandoorne has given his McLaren F1 Team employees even more food for thought as they decide on their 2015 line-up by dominating the GP2 Series feature race in Abu Dhabi and take second place in the championship.

The Belgian, driving for ART Grand Prix, got his pit strategy spot on as the Supersoft Pirelli tyres did not last long enough for Jolyon Palmer or Mitch Evans to challenge for the win, with Vandoorne ultimately doubling his lead over the final few laps after only running the Supersofts in the opening few laps of the race.

2014 GP2 Series champion Palmer ended up second for DAMS, who secured the Teams’ Championship with the result, coupled with Stephane Richelmi finishing in fifth. Evans completed the podium for Russian Time, dropping back from Palmer over the closing laps after also struggling with the Supersoft tyres.

2015 Sauber F1 Team driver Felipe Nasr, running the same strategy as Vandoorne, was not able to remain on the pace of the race winner, but was able to pass Trident driver Johnny Cecotto Jr for fourth a few laps from the end, with Richelmi following through a few laps later into fifth.

Cecotto held on for sixth, with Racing Engineering’s Stefano Coletti holding off Arthur Pic of Campos Racing for seventh. Pic’s eighth place finish will give him the Sprint race pole position on Sunday.

Rio Haryanto took ninth for Caterham Racing in their last weekend before becoming Status Grand Prix in 2015, while the final point went to MP Motorsport’s Daniel de Jong, who passed Raffaele Marciello of Racing Engineering on the final lap as the Ferrari Driver Academy driver was another to struggle with the Supersoft tyres.