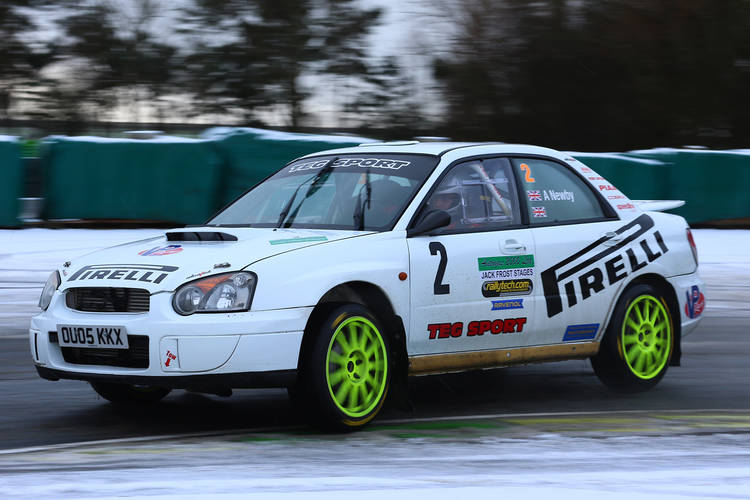 Arron Newby started the year in a positive manner when he took victory at the annual Darlington and District Motor Club‘s Autogas 2000 Jack Frost Stages Rally at a snowy Croft Circuit.

Along with co-driver John Cope, Newby steered his Subaru Impreza to the win as he beat three time winner Chris Wise in his MG Metro 6R4 by 17 seconds.

SS1 saw Wise take the advantage in the dry conditions, finishing 15 seconds faster than Newby who was using the event as a test for the TEG Sport gravel car.

The second stage of the day was abandoned after weather affected the stage times with Newby finishing two minutes faster than later competitors.

With the times reset Newby had it all to do again as he looked to close in on the 15 second gap to Wise, the weather soon changed from sleet to snow and Newby lost time on SS5 before claiming the fastest time on SS6 as the rain lifted.

Newby would benefit from a poor stage from Wise as dusk rolled in and started the final stage with a 12 second lead. Despite the snow coming in once again the stage would carry on, Newby finished third fastest but that would be enough for his 16th career win and a debut victory at Croft.

“Considering we only came to Croft to test the diffs in the gravel car, to then win the event is an absolute bonus and a mega start to the year.” said Newby. “After the snow started to come down heavy on stage two, we had a clean enough run to come out of there two minutes ahead of all the front runners, but as more of the field went through it became a lottery and it was scrapped so I found myself in 38th position.

“Despite the slush, snow, ice and wet conditions, we managed to not only do the testing we needed, we also tested the new Pirelli winter tyre which worked brilliantly in the horrible conditions. First overall on the first event of the year is fantastic and a massive thanks to John Cope for navigating, he did a superb job and we had a great laugh all day. Thanks to all at TEG Sport for the support in the cold conditions and to all of my sponsors including Pirelli, VP Race Fuels & Ravenol Oils.”

Stuart Newby, TEG Sport Team Owner added: “After a steady start and having not driven the car since finishing second on last November’s Premier Stages Rally, all was going well when a monumental amount of snow fell for the start of SS2.

“We fitted the new winter tyres that Pirelli had kindly sorted out for us last minute Friday night and put in a blinding time beating our nearest rivals by over two minutes but by the time all 90 cars had been through it the times were a lottery which resulted in stage maximums being given. A full on attack from that point saw us climb back up before taking the lead towards the end and going on to win.”

Ulster Rally Preview: Ireland The Penultimate Stop For The 2017 BRC

RSAC Scottish Rally Preview: Ahlin Aims For Three Out Of Three In...

Ahlin Takes Second Win Of The Season At Pirelli International