The eni Superbike World Championship rides into 2015 on the crest of a wave after the gripping finale to its 27th season. 24 races saw no lack of drama and controversy with inter-team relationships stretched to the limit but with the spotlight shining on him under the night sky in Qatar, Sylvain Guintoli rode the races of his life to snatch the title from Tom Sykes’ grasp.

Keen to ensure this season’s title fight matches the intrigue of 2014, Dorna have introduced tweaks to the technical regulations, effectively bringing last season’s EVO rules into force through the entire field. Minor tweaks to those rules include greater ability to tune with camshafts and cylinder heads free but as far as electronics are concerned, each manufacturer will be required to provide a Superbike Kit System, price limited to €8000, which will be available to the independent teams at three points during the season, the intention being to maintain a certain level of parity between the haves and the have-nots.

Many expected the rule tweaks to play into Ducati’s hands, with the team’s Panigale needing minimal changes to conform to the new regulations, and pre-testing at Jerez backed up that theory. Davide Giugliano set a blistering pace to edge out the factory Kawasakis but the headlines centred on the newly crowned champion who had already piled the pressure on his own title defence. Three laps into the opening day and Sylvain Guintoli would suffer a heavy crash causing injuries to his back. The world champion has managed to make it to Australia but will be walking wounded around the Phillip Island paddock.

The feel good factor around Ducati wouldn’t last long either with Giugliano the next rider to be struck by the injury curse. The Italian highsided at the MG hairpin, just four days before the opening practice session of the season, causing two micro-fractures to his L1 and L2 vertebrae. Doctors have advised him not to ride a motorcycle for 90 days, ensuring the earliest he will be seen is Donington Park. As a result, one of 2015’s likely title challengers is already out of contention.

So who can we expect to be in championship contention come the autumn? Well there can surely be no-one on the 2015 grid with as much motivation as Tom Sykes, having fallen agonisingly short of retaining his crown last season. One thing is for sure, the Yorkshireman certainly can’t rely on the support of his teammate this time around with the tricky Loris Baz being replaced by a man many see as the strongest pound-for-pound rider in the class.

For an entire decade, Jonathan Rea has shown nothing but undivided loyalty to Honda in whichever championship he has competed in, nationally or internationally, but for 2015 the Ulsterman has finally chosen to fly the nest and join the 2013 champion at Kawasaki. The British duo haven’t exactly seen eye-to-eye over the years and their relationship will be fascinating to follow, especially if they are in direct competition for the world title. The smart money though would suggest that the winner of this inter-team battle will eventually land the big prize in October.

Ducati would certainly have fancied their chances but the probability of a Panigale rider prevailing has already been cut in half due to Giugliano’s injury. All hopes will now rest on Chaz Davies with the Welshman charged with the task of turning occasional victories into something more consistent. At least Chaz will be able to avoid the limelight this weekend with spectators and media certain to have their eyes focused on the other side of the garage as three-time Troy Bayliss makes a one-off return in Giugliano’s place.

After powering Sylvain Guintoli to the championship in 2014, Aprilia have taken a slight step back from World Superbikes as focus shifts to their MotoGP return. The Italian manufacturer is now running a semi-factory operation after collaborating with the Red Devils Roma outfit, fielding Leon Haslam and ex-Moto2 rider Jordi Torres. The early signs indicate that the RSV4 has lost none of its pace and with Torres already making an impression alongside the revitalised Haslam, they could be a dark horse.

Outpacing them all in testing though was the Voltcom Crescent Suzuki team courtesy of the improving Alex Lowes. The 2013 BSB champion showed flashes of real potential in his first full SBK season, taking podium finishes at Assen and Donington Park, but promising weekends were often ended by untimely accidents. The Lincolnshire rider will be targeting 2015 as a real breakthrough year and the pace and consistency shown in testing this week gives hope that a victory or two could be on the cards, possibly sooner rather than later.

So what about the champion himself, Sylvain Guintoli? The testing injury means he will immediately start the defence of his title on the back foot but Sylvain has built his championship challenges on consistent point-scoring and podium finishes. A solid haul of points will be seen as a successful start for Guintoli who is likely to get stronger as the year goes on. Whether he improves enough to keep hold of his crown remains to be seen.

Guintoli’s more immediate concern may be keeping his rookie teammate in check. Fresh from winning the World Supersport title, Michael van der Mark moves up into the second PATA Honda World Superbike seat. The Dutchman clinched last year’s championship with plenty to spare and has enjoyed an edge over Guintoli in testing this week. The big test of the ‘Magic Mike’s’ powers will come when he has a fully fit teammate but the Dutch fans certainly look to have a new superstar to support.

Many of this season’s rookies bring their own interesting story with the popular Torres already winning further admirers at Aprilia while his former Aspar Moto2 teammate Nicolas Terol looks to rebuild a career which has stalled since winning the 125cc World Championship, the Spaniard joining Matteo Baiocco at Althea Ducati. Another man looking to recapture his best form is Randy de Puniet who switches from Suzuki’s MotoGP tester to second Superbike rider but the Frenchman will have his hands full given Alex Lowes’ recent form. 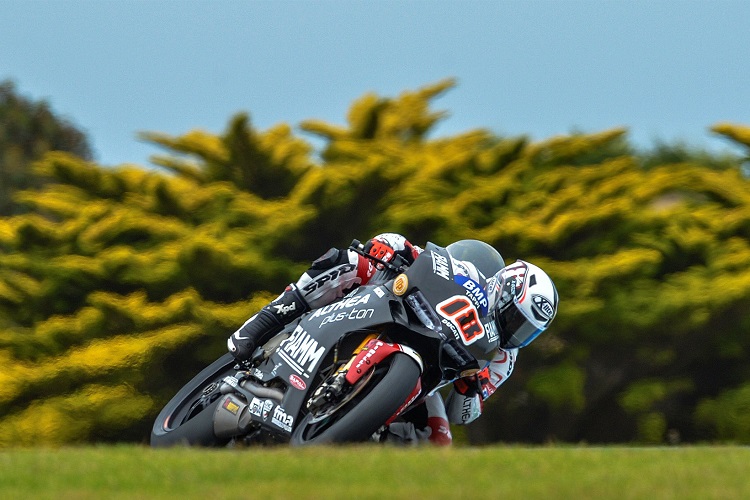 A fresh start could be just what Nicolas Terol needs (Photo Credit: WorldSBK.com)

No fewer than seven manufacturers will be represented with Sylvain Barrier back for a second season with BMW Motorrad Italia while Troy Corser’s newly formed JR Racing Team will also use BMW power with Toni Elias and Ayrton Badovini on board. EBR will be aiming for an improved second season following the signing of Niccolo Canepa while Leon Camier flies the flag for MV Agusta, bringing the total of British competitors up to six.

On paper, the 2015 eni Superbike World Championship has all the ingredients of an absolute classic. New frontiers will be explored with Thailand hosting a round for the first time, the 24th different nation to host a round of the series. Donington Park will host Britain’s sole round in May while the spectacular late-night setting of Losail will play host to another title decider, should the battle stay alive that far.

If what we’ve seen so far is any indication, a last round showdown is highly likely. With so many new pairings, much more than a trophy is at stake in 2015. Reputations will be put on the line this season with some careers made, and some broken, by the next eight months of racing. It’s time to deliver.