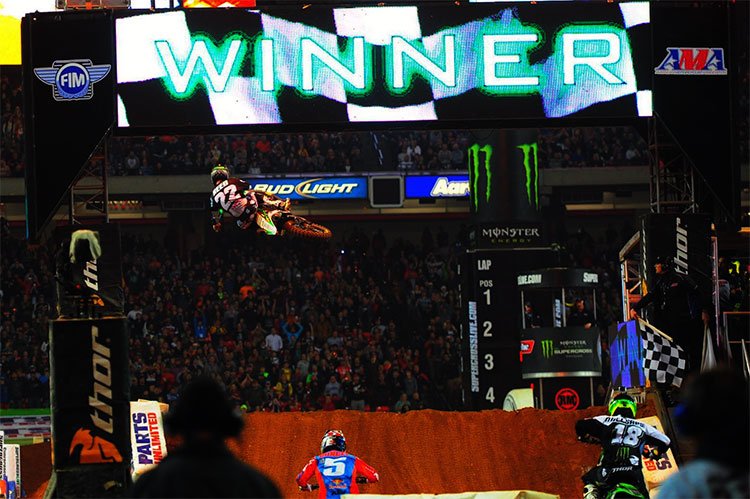 Supercross pundits often tell us ‘starts win races,’ but veteran and two time former champ Chad Reed proved the theory has legs after a start to finish win in Atlanta. He was put under pressure towards the end of the race, but the Australian proved he still has what it takes to win after a tough start to his 2015 campaign.

Reed on the Discount Tyres Kawasaki nailed the start and early laps on the red Georgia dirt, after a crash earlier in the day Ken Roczen was struggling down the pack as ominously for the title challengers the only frontrunner in the points close to the escaping Reed was points leader Red Bull KTM’s Ryan Dungey. Impressing a lot early on was Weston Peick, the JGR Yamaha man injured early in the season after some superb rides, looking to be bang back on form at Atlanta in second early on.

A few laps in and Reed looked comfy up front. Dungey hasn’t yet made much impression on Peick as further back Honda riders Eli Tomac and Trey Canard fight their way to the top 5. Then yet again Tomac makes a mistake, loses the front end of the Geico Honda and is down. His consistency so far not keeping up with his obvious speed. Bad starts really penalising the talented Tomac too, but speed wise he is perhaps the fastest out there.

Then even bigger news, after a bad crash early on the meeting, another big spill for Ken Roczen on the RCH Suzuki, the German dismounts with a huge air dive after parting company with the bike, but amazingly he managed to get back into the race.

Up front meanwhile Dungey is laughing all the way to the title with Roczen and Tomac scoring low points, the points leader managed to pass Peick in a  superbly judged move, with Trey Canard also closing, but up front Reed looks super solid and has a decent gap on second. But now, the chase is on. The Diesel is coming…

One lap Dungey takes a few tenths, the next lap Reed responds, proper tit for tat here between two great champions of Supercross. Further back, Peick no doubt hurting after his early season injuries is passed by the mightily impressive rookie Cole Seeley, the HRC Honda youngster quietly going about his business, not taking huge chances but putting together a superb run of results right now.

3 to go and Dungey is just over a second behind Reed, but hindered by lapped traffic and a determined effort from Reed meant the points leader was denied his third win of 2015, with the first of the season going to the hugely popular Reed.

Also a first win of 2015 for Kawasaki, the reigning champions that have dominated for so long with Ryan Villopopo, their factory team are struggling but Reed has made up for it with a win here. Dungey extends his points lead in second and Canard cruises home in third to continue his impressive campaign.

For the second round of the 250 East coast championship the racing was simply superb. First round winner Marvin Musquin got a poor start and had to battle past some slower guys, bringing Yamaha’s Jeremy Martin with him, while the lead had been taken initially by Martin Davalos, a series veteran starting his year superbly for Rockstar Husqvarna. Also up front in the early stages while the two behind made up for lost time was reigning champion Justin Bogle on the Geico Honda, waiting to pounce.

Up to halfway and we had a 4 way lead battle, this series proving already just as entertaining as the 250 West series with it’s young riders eager to impress.

Bogle made the first move to pass Davalos, with Martin quickly taking advantage of the move to block pass Davalos into second. Musquin was also quickly past the now fading Davalos into third, recovering from a slight mistake that dropped him time. First joust and Martin lunged at Bogle, almost there but Bogle fights back, Musquin tried to take advantage and cases the Red Bull KTM in his attempt to pass and stays 3rd.

3 to go and Martin blasts past Bogle in the whoop section, the hardest place to pass on any track to take the lead with Musquin right there still. A lap later and Musquin is second, but Martin drops the hammer and has too much of a gap and takes the win. So Yamaha are doing as well here as they did with Cooper Webb in the West. Musquin, a champs ride to retain the red number plate of points leader.

Kiara Fontanesi: The Making of a Champion