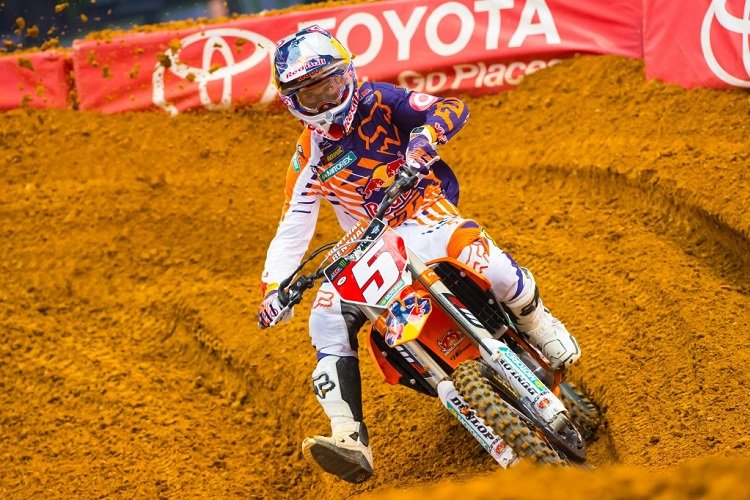 The 2015 Monster Energy Supercross season moved away from the West coast of the US this weekend as Arlington in Texas hosted the latest round. And what a day for points leader Ryan Dungey and Red Bull KTM, so often criticised for doing just enough and not winning, the 2010 champ dominated the event on the red dirt, with his 250 class team-mate Marvin Musquin winning also in their first round, team boss Roger DeCoster was no doubt the happiest man in motocross!

Dungey’s recipe for success this year has been starts. Every time he has got away in the first two he has been able to do very well, and so it was the case on the very rutted, technical track at Arlington. He got the holeshot and was followed initially by the so far underperforming in 2015 Davi Millsaps on the Monster Kawasaki who made a great start.

RCH Suzuki‘s Ken Roczen didn’t quite make the start this time and steamed past Blake Baggett as further back the other championship contender and round winner, Eli Tomac clashed with Chad Reed, the veteran who has been on the receiving end a little recently went down again as Tomac brushed him aside in a turn.

Then it was Tomac’s turn to get bucked off the Geico Honda, seemingly hitting a rut that was hidden by the track workers who had filled in some bad ruts, the unfortunate Eli got spat off again, that pace that takes you to wins can also be a hindrance when you make a bad start it seems.

Winner last time out Trey Canard on the HRC Honda made an avergae start too and was now just behind Roczen in fourth as they closed on Millsaps.

Then Roczen was through, quick as a flash, could we have another battle between Ken and Ryan like last week?  Canard was there quickly too as Millsaps made a rookie error wheelying off the bottom of a simple jump, his fitness just not quit there yet in a poor showing for him so far.

The race for the lead never materialised sadly. Dungey was just too good, kept edging the gap and Roczen didn’t have anything left to close the gap. Canard was well beaten in third.

Great result for Blake Bagget on the Yoshimura Suzuki in fourth, and again that solid veteran Andrew Short nicks a top 6 with fifth in front of class rookie Jason Anderson, continuing a solid start for Husqvarna.

The win moves Dungey 12 points clear in the title race from Roczen as the series moves to Atlanta next week.

The 250 class that supports the Supercross season is split into East and West series and riders, who come together to decide the overall winner in the last event of the season in Las Vegas. Each coast has it’s champion and teams often have a bike in each coast too.

Like his former team-mate at KTM Ken Roczen, Marvin Musquin is European, French to be precise. And after winning two MX2 championships was keen to further his career in the USA. His progress has been blighted by injury, but he started his 2015 campaign off in truly dominant style by leading every lap and being clearly faster than every rival at Arlington.

Reigning champion Justin Bogle for Geico Honda was not able to challenge, but sadly for him was a fair way ahead too of his rivals, these two dominated after some mid race shenanigans slowed the progress of the rest of the grid.

What to expect from Alex Marquez in 2020 alongside brother Marc Marquez...

Fenati has First Pole since 2017 taken away after Penalty – McPhee...