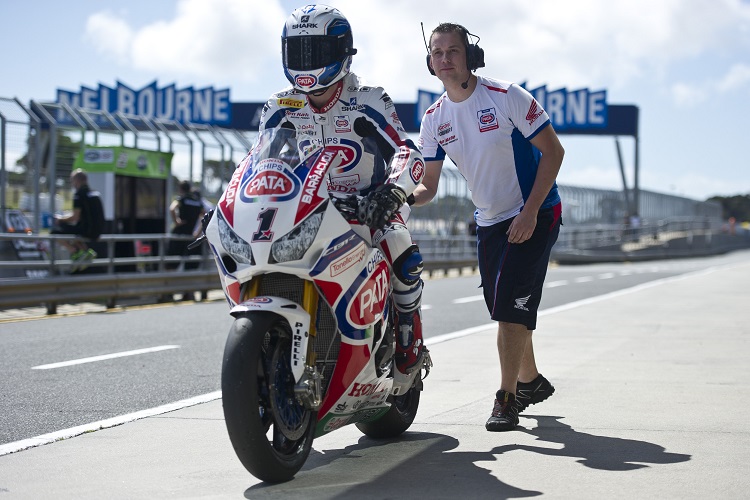 Sylvain Guintoli was in high spirits at the end of pre-season testing despite finishing twelfth fastest at the end of two days at Phillip Island. The defending champion was making his return to action after injuring his back at Jerez last month and admitted it took him a while to regain the confidence to push his PATA Honda to the limit.

“We’re working hard and I’m actually feeling quite upbeat tonight, despite being quite a way down on time. It was important to get back on the bike here because obviously at the last test I didn’t get any track time, so almost no winter testing. I missed out on some good conditions in Jerez and I had to rebuild my confidence as well after that massive crash there. I had a little off today as well, which, in a way was quite good and it kind of woke me up at the end of the second day!”

Teammate Michael van der Mark continued his promising start to life in the Superbike class, going ninth fastest, and the Dutchman now feels he is well prepared for his SBK debut this weekend.

“I’m really excited now because I love racing more than testing! I think everyone’s the same but we needed this test and I have a good feeling now. Most of the time for me has been making laps, and lap-by-lap I’ve improved. It’s quite difficult – everyone is really fast and I’m still learning, but that’s the way we have to do it. We’ve had two quite good days and tried a lot of things and we’ve seen which things work and which things don’t, so I’m looking forward to starting the race weekend.”