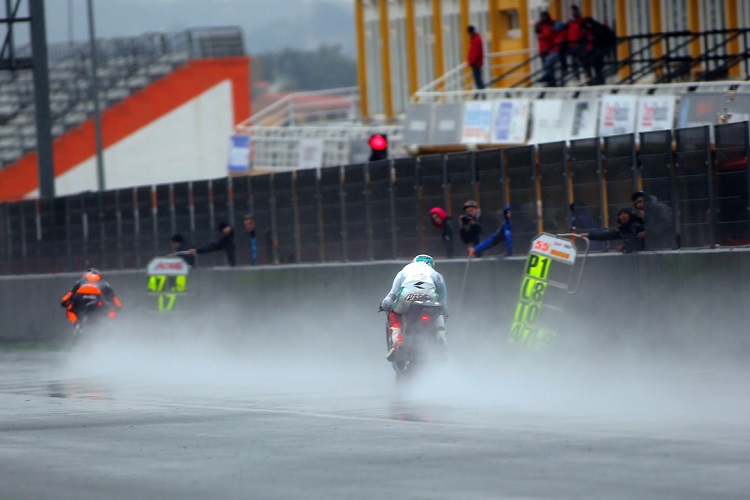 The Moto2 and Moto3 riders were left frustrated for the second consecutive day as heavy rain prevented any dry running on the final day of the Valencia test. Although Thursday saw slightly more track action as riders gained experience on the Dunlop wet tyres, action and incident remained sparse with riders turning their focus to next week’s test at Jerez.

To make matters worse, oil was dropped on the already-sodden circuit between turns one and four, bringing out the red flags while the surface was cleaned. When testing did resume, Hafizh Syahrin resumed his wet-weather dominance by topping the times for the second day in a row, edging out Moto2 rookie Florian Alt by half a second. Last year’s title runner-up Mika Kallio was third fastest but the quickest time overall went to Johann Zarco courtesy of his flying lap in the dry on Tuesday.

Moto3 also followed a similar pattern to Wednesday’s proceedings with the Mapfre Mahindra squad doing the bulk of the running. Of the six riders to venture out in the morning, the Aspar-run squad accounted for half of them with Jorge Martin leading teammates Francesco Bagnaia and Juanfran Guevara. Conditions didn’t improve later in the day due to the unfortunate oil spillage but that didn’t stop John McPhee snatching second, 0.742s ahead of Bagnaia but a second and a half down on the Red Bull Rookies champion.

The week though would belong to another rookie with Fabio Quartararo’s stunning effort on day one keeping him top of the overall classification.