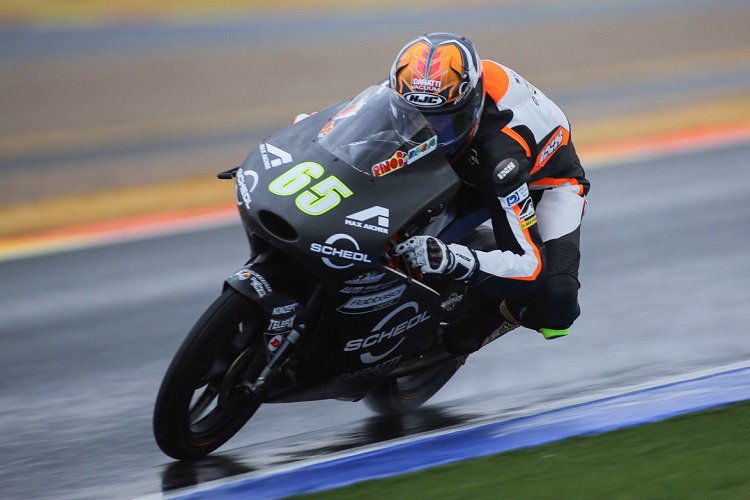 Persistent rain kept running to a minimum on the second day of the opening Moto2 and Moto3 pre-season test at Valencia. Less than half of the respective fields ventured out with conditions never conducive to meaningful running and the riders will now look towards Thursday’s final day for some dry track time.

The quickest times came early on in damp conditions as the weather deteriorated as the afternoon progressed. Hafizh Syahrin, a rider who made his name with a sensational wet performance in Sepang three years ago, showed his prowess on a slippery race track again with a 1:47.666, 1.2s quicker than Italtrans’ Franco Morbidelli. Johann Zarco was another of the nine riders to brave the conditions but the Frenchman was a full sixteen seconds shy of his Tuesday benchmark.

In Moto3, the circuit almost belonged exclusively to the Mahindra riders with seven of the nine riders to take part running the Indian machinery. The factory Mapfre team had the third session all to themselves with Juanfran Guevara, Jorge Martin and Francesco Bagnaia going it alone but none of them could challenge Philipp Oettl’s morning time, the German topping the timesheets on a 1:52.107 despite a minor accident.

Alessandro Tonucci was second fastest ahead of Martin and Tatsuki Suzuki with Bagnaia and Guevara fifth and ninth respectively, the latter also sliding off track as conditions proved too difficult.