Mason Makes it Two from Two for Champions 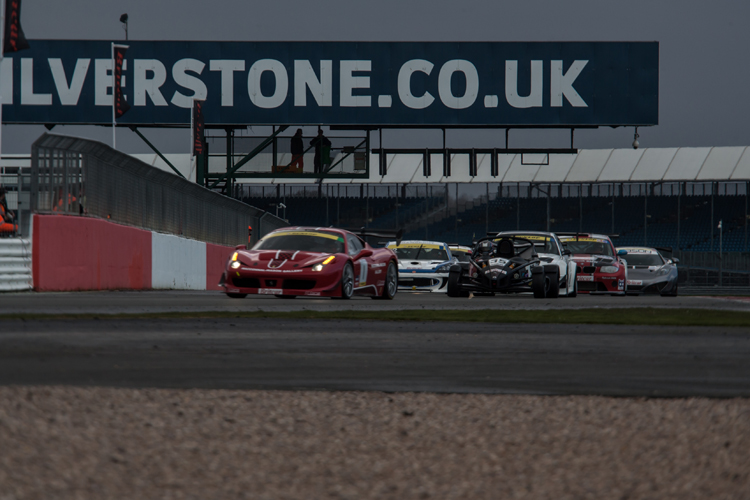 FF Corse’s perfect weekend continued in the second race of the 2015 MSA Britcar Dunlop Endurance Championship with another victory. The reigning champions of Calum Lockie and David Mason faced a stronger challenge in the second race but still had over sixteen seconds of advantage at the end of the shortened race.

Once again, Lockie started the Ferrari 458 Challenge and built an immediate lead, pulling out the length of the Silverstone National pit straight in the first three laps. A stronger challenge from the McLaren of Daniel Gibson and Paul Gibson and the Audi R8 LMS of Pelle and Cook added to the thrill of the race in the later stages, as did the arrival of the Motionsport Wolf CN.

The Neil Garner Motorsport run car impressed from the moment it took to the grid. Pete Storey started the car and kept on terms with the leading Ferrari, bringing the mini prototype to the pits just after the halfway mark. Storey handed the car over to Ginetta Juniors graduate Oli Chadwick who promptly stalled on the way out of the box. He quickly recovered, before holding the gap to David Mason for the final laps.

The Gibson Motorsport McLaren lost a lap to the CN car but fought a fantastic running battle with the Simpson Motorsport Audi. The two crossed the line within four seconds of each other, rounding off a solid block of class 1 machines in second, third and fourth.

Whilst every car that started finished, an unusual turn of events for Britcar, not every machine had a trouble free run. Nick Holden’s Ariel Atom didn’t have any particular problem, but the pace which had the #35 machine in second during the first race appeared to have abandoned the Holden Autosport machine.

The Ariel battled with Ian Anderson and Amanda Black in the Lifetime Racing Ginetta, ending the race just eleven seconds off the trackday machine. Ninth place was poor reward for Richard Neary and Martin Short. The Rollcentre Racing BMW M3 just couldn’t find the pace of the morning and finished the race one lap ahead of the 22GT Racing Aston Martin.

The next race on the Britcar calendar is the eagerly awaited Dunlop 24 Hours at Silverstone, a non-championship meeting which will see the Endurance Championship field heading up a bumper 24 hour grid. Points scoring action returns in June with a trip to the dunes of Zandvoort.